Scotties Volunteers Finish Up August with the Blues

It’s been a busy summer for the volunteer team promoting the 2013 Scotties Tournament of Hearts – the Canadian Women’s Curling Championship – destined for Kingston’s K-Rock Centre February 16-24. 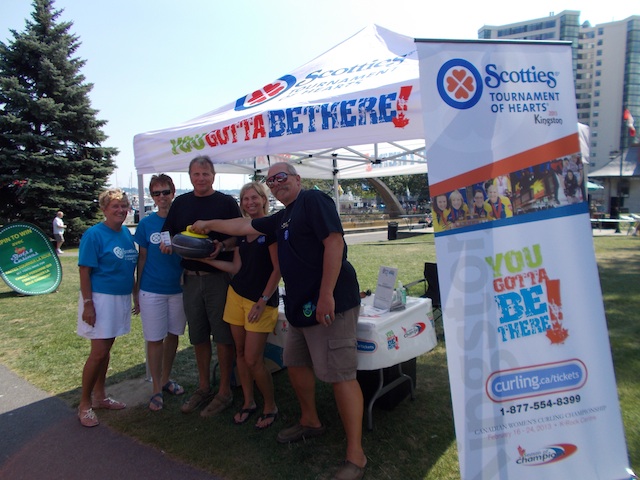 August has been especially hectic with the Scotties ambassadors attending ten separate events around the community, closing out the month August 23-26 at the 16th annual Limestone City Blues Festival. The volunteers cleaned out the remaining inventory of event golf tees and ball markers, spread the word on the upcoming championship and encouraged festival attendees to enter the August draw for the opportunity to win a pair of Opening Weekend ticket packages to the Scotties. The festival attracts thousands of blues enthusiasts to downtown Kingston each year to take in a lineup that features some of the most talented artists in the business – performing at a number of outdoor venues including Confederation Park stage, the Princess Street stage and a wrap-up concert at Market Square. “It’s been an excellent month for us in terms of generating excitement for the Scotties,” notes Promotions Director Betty Bush.  “The Limestone festival was a great event with so many music lovers on the scene over the weekend.  It was a chance for our volunteers to remind everyone that we have a host of top-notch bands performing at the party in the HeartStop during the Scotties.” The head of the promotions team extends thanks to everyone who worked so hard throughout the summer, adding that openings are still available for additional volunteers to get involved, particularly in the banking and bar service areas.  Applicants can register online by clicking here. “A number of promotional opportunities are in the works for September and we’ll be posting details in future updates,” says Bush. “You Gotta Be There” when the best curlers in the country rock the house for the Scotties… and some of the hottest bands in the land hit the stage in the HeartStop.  Prime seats are available now by clicking here.