Brewster is Back to Defend WFG Continental Cup Title

The future of men’s curling in Scotland appears to be in very good hands with the Tom Brewster team stepping up to carry the torch ignited by David Murdoch, a two-time gold medalist at the World Men’s Curling Championship. 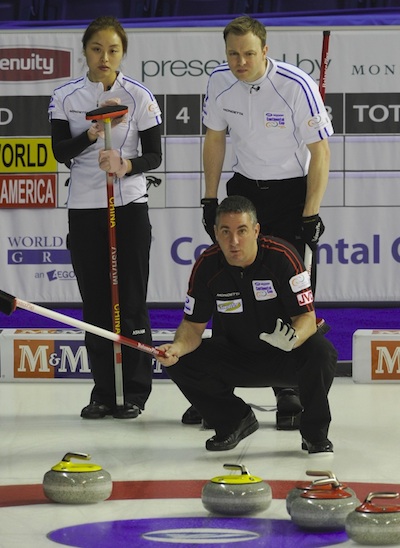 Brewster has been hammering at the door the past two seasons with emotional losses in the championship finals of the 2011 Ford World Men’s Curling Championship and the 2012 Ford World Men’s Curling Championship. At the 2011 Ford World Men’s in Regina the Scots faced a red-hot Canadian crew skipped by Jeff Stoughton with top spot on the podium at stake.  Last year, the final went to an extra end before Team Canada’s Glenn Howard wrestled away the gold medal in Basel, Switzerland. But the personable Scottish skip, along with teammates Greg Drummond, Scott Andrews and Michael Goodfellow, got a welcome taste of victory as part of the Team World contingent that bested their North American counterparts in the eighth edition of the 2012 World Financial Group Continental Cup of Curling in Langley.  It was a pressure-packed win that evened the international showdown at four championships apiece. After launching his competitive career on a high note with a 1995 World Junior Men’s Curling Championship gold medal, Brewster competed for several years in the shadows of international heavyweights such as Murdoch, Hammy McMillan and Warwick Smith.  His next opportunity to experience the heat of international competition came in 2002 as an alternate for Smith in the Ford World Men’s Curling Championship. The native of St. Andrews presently curls out of Curl Aberdeen, one of the premiere facilities in the community that is coincidentally known as “The Granite City”.  As Manager for Curl Aberdeen, Brewster understands all the intricacies of the ice – and he’s undoubtedly hoping that will be the case when he heads to Penticton’s South Okanagan Events Centre, January 10-13 for the rematch between Team World and Team North America at the 2013 World Financial Group Continental Cup. “You Gotta Be There” to see the biggest names in the roaring game compete in one of the most entertaining championships of the season.  Make sure you’re there for all the action by clicking here to get your Full Event ticket package today!