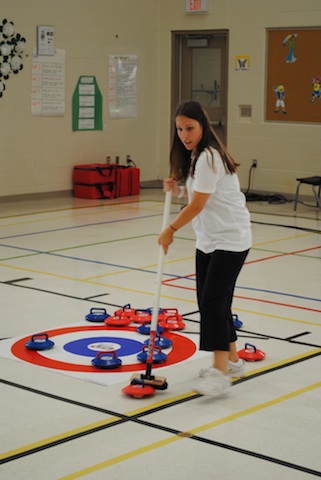 At first I thought that it would be very different than working in a school, but the enthusiasm I received from the children was still the same, if not greater. Children were eager to try out curling this summer at their camps and day cares, and many were very intrigued by the sport. I even had some children ask when they could start curling, and I had to break the news to them that unfortunately, they would have to wait a few months for the season to start. It is a great feeling when you see the children enjoying themselves and asking how they can continue curling outside the Rocks & Rings experience. The program became a little different for me as I entered into the summer camps. Some camp counsellors requested that we had more playing time and less instruction time, as the children were very anxious to play more than to learn. When working in a school setting, I have experienced that the teachers require more instruction, as they want the children to learn about the sport. In a summer camp, the setting is much different as most children are signing up at these camps to play games, have fun, and meet new friends, and the emphasis on learning is lessened. It was very exciting for me when I would see children asking more questions because they wanted to learn about curling, despite being on summer vacation and not in a school setting. I would see some children in the summer camps who would shout out “I know you, you came to my school” and “I’ve done this at my school, it’s so much fun.” The children who have done the program before in their school wanted to participate in it again, and they were very eager to shout out answers to the questions and provide examples to show other children in the camp what to do. It impressed me that they remembered things like where the button was and how to score a point. I found it rewarding because they had remembered what I had taught them earlier that year in their school, which I think means they were interested in learning about curling and I hope that means they may try curling in the future. There are always a few children who look at our program and the sport of curling and think of it as weird or different. I experienced this at a summer camp with an emphasis on hockey. They might say things like “We have to sweep the floor?” or “This looks boring.” My favourite part of the summer was introducing curling to those children. At first, their attitudes towards the program are poor and they appear to be uninterested, but once they see the other children participating and having fun, they join in. I really enjoy the looks on their faces when they try out this new sport and have a blast. They become so engaged in the activities and become a part of their team. The goal of the Capital One Rocks & Rings program is to introduce the sport of curling to those that may not know what curling is all about, and this summer we continued to do so despite the school year being over. We hope to reach out to more and more children each year, and now the Rocks & Rings program can be available year-round. 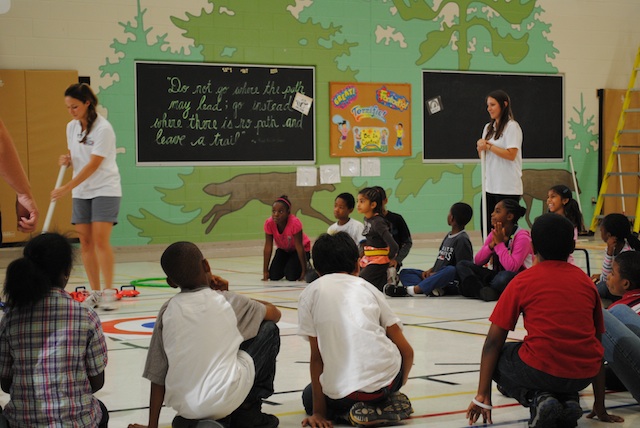 “Children were eager to try out curling this summer at their camps and day cares, and many were very intrigued by the sport.” (Photo courtesy Rock Solid Productions Inc.)