In five trips to the World Women’s Curling Championship beginning in 1997, the best result to date for Switzerland’s Mirjam Ott had been a 2008 bronze medal performance in Vernon.  But that changed in a big way at the 2012 showdown in Lethbridge. A sixth shot at the Ford World Women’s Curling Championship proved to be the turning point when the Swiss skip finally struck gold… and the rights to top spot on the podium came in dramatic fashion.  Ott delivered a pair of perfect stones in the 10th end of the championship final to count a pair for a 7-6 win over Sweden’s Margaretha Sigfridsson. The two finalists in the 2012 Ford Women’s Worlds will be back on Canadian ice January 10-13 in Penticton for the 2013 World Financial Group Continental Cup of Curling.  This time out they’ll be wearing Team World uniforms, sharing the goal of defeating Team North America to take a 5-4 lead in the international curling classic. Ott, silver medalist at both the 2002 and 2006 Olympic Games, has also appeared in nine European Curling Championships earning two gold, three silver and three bronze medals. Along with teammates Carmen Schäfer, Carmen Küng and Janine Greiner, Ott joins the Team World contingent in the South Okanagan Events Centre to defend the title they captured last January in Langley. “You Gotta Be There” for the 2013 World Financial Group Continental Cup of Curling when the top players in the game compete in the unique display of strategy and skill.  The best seats in the house are available now by clicking here. 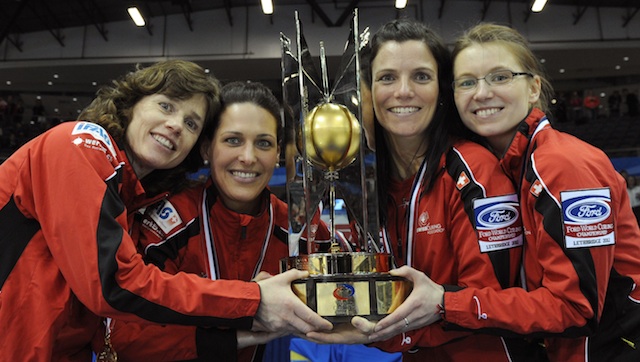