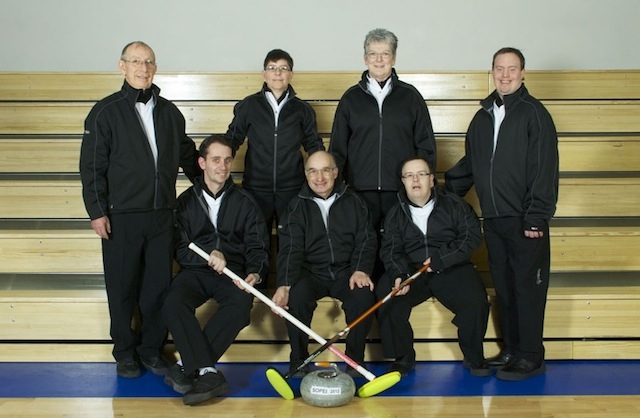 For skip Greg St. John, mate Phillip Chugg, second Chris MacPherson, and leads Monique Gauthier and John Anthony Laybolt (who also serves as fifth player), along with their head coach Dick St. John and assistant coach Ann Doucette, this well-deserved honour comes after years of hard work. “In less than 10 short years, these gold medal-winning PEI athletes grew from a handful of individuals whose main concern was about not slipping and falling on the ice, to a team which despite the undersized pool of curlers in our small province, developed personal, technical and team building skills and went on to demonstrate, on the Canadian stage, just how this major feat could be accomplished,” wrote parent and team manager Paula Gauthier in a letter to the nominating committee for the Special Olympics Canada Team of the Year Award. According to coach Dick St. John, the successes enjoyed by the team are the result of dedicated preparation – conditioning, on-and-off-ice training, team building activities, not to mention weekly practices at the Charlottetown Curling Club, league play at the Cornwall Curling Club, and participation in local bonspiels. The team also benefited from the support of its provincial organization, Special Olympics PEI, who helped finance training for the coaches as well as providing opportunities for competition within the Maritimes. Winning the gold medal at the national Special Olympics championship was a tremendous success, says St. John, but there was more to that victory than a medal: “The players grew as individuals and as a team through the experience.” And none of it could have happened, says assistant coach Ann Doucette, “without the support of Special Olympics PEI, parents and guardians, volunteers, curling clubs and organizations, sport professionals, and last but not least the coaches who were with them every step of the way.” “It is such a privilege to work with Special Olympics athletes,” says St. John. “While I can provide them with guidance, opportunities and encouragement, I often think that I am the net beneficiary from their commitment, enthusiasm and friendship.” The 24th Annual Special Olympics Canada Awards take place Thursday, November 29 in Toronto to recognize and celebrate “outstanding performances and contributions of Special Olympics athletes, coaches and volunteers” to the Special Olympics movement. Read more about the team’s victories at the Special Olympics Canada Winter Games and their selection as PEI Curling’s Team of the Year.