Jeff Stoughton kept his undefeated record alive with a decisive 10-4 win over a struggling Kevin Martin, joining Mike McEwen at the top of the leaderboard after five draws at the 2012 Capital One Canada Cup of Curling. 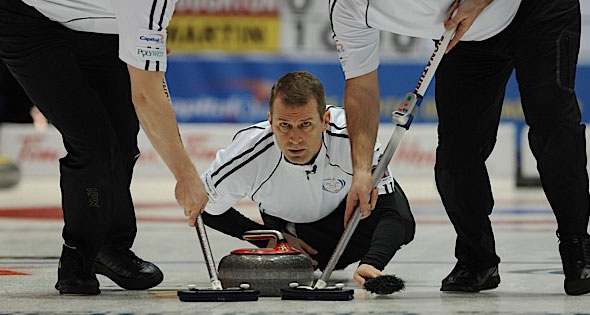 Jeff Stoughton delivers his stone in Draw 5 action on his way to a 10-4 win against Kevin Martin. (Photo: CCA/Michael Burns Photography)

Martin made two uncharacteristic misses to give up a steal of 3 in the third and two more in the fourth and fifth to give Stoughton a 6-1 lead after five ends. Picking it up after the break, Martin regrouped, taking two in six and stealing another in seven when Stoughton’s draw missed the four foot. In eight, Stoughton was forced to make a clutch draw to cover the pin, which he did, taking a 7-4 lead into nine. But it fell apart for Martin in the ninth, when his draw against three came up short, giving Stoughton the 10-4 victory. “You want to score as many points as you can against these guys because they never go away, you always want to stay in the game,” said Stoughton about building a big lead in the first five ends. “So we’re glad we had as many on the board as we did.” Stefanie Lawton and Kaitlyn Lawes (Team Jones) met in the battle of undefeated women’s teams. Lawton emerged with a 7-5 victory after keeping the pressure on throughout. “We had some missed opportunities, and it was back and forth,” said Lawton. “We struggled for the first five for sure. The ice was slightly different from this morning and we were adjusting again. We made a few adjustments after the fifth and things went well from there.” Lawton now sits alone at the top of the women’s draw, but she knows there’s no opportunity to let up. “There’s no breathing room,” she admitted after the game. “We just keep going. Every win is a big one.” In the other women’s game, Sherry Middaugh improved to a 2-2 record with an 8-7 win over Crystal Webster in an evenly matched, close game. “We’re making shots,” said Middaugh, explaining the difference in her team’s play after struggling on the first day of competition. “It was a very close game and it was just a case of making the right shot at the right time. Our ends got a little messy and in the tenth end it wasn’t looking very good, but we were fortunate we came out with a deuce.” httpvh://www.youtube.com/watch?v=8-Sc89BEaOI In the other men’s game, Glenn Howard appeared to be back on form after two opening losses. Taking 3 in the first end, he then went on to steal 2 in the second. After taking a single in three, Epping put the pressure on in four, holding Howard to a single and fighting back with a deuce in the fifth for a 6-3 score heading into the break. Howard took 4 more in the seventh for a 10-4 win. “Totally different team today,” said Howard when asked about his team’s turnaround play on Thursday. “We struggled yesterday, there’s no two ways about it. All four of us did not play well. And we knew if we didn’t step up our game we weren’t going to win a game.” “We came out of the gate well and had a great first end. John missed a tough shot for three, and we stole two. And we just tried to hang on from there.” McEwen and Stoughton sit at the top of the standings at 3-0, followed by Koe at 2-1, Howard and Martin at 1-2, Epping at 1-3 and Gushue at 0-3, still looking for a win. In the women’s draw, Lawton remains undefeated at 4-0, Jones and Nedohin are at 2-1, Middaugh and Webster are close behind at 2-2, and Carey and Overton-Clapham are winless at 0-3. Thursday night action will see Gushue vs Stoughton, Jones vs Nedohin, Carey vs Overton-Clapham, Koe vs Howard, and McEwen vs Martin. [flickr-gallery mode=”tag” tags=”2012cancupd5″ tag_mode=”all”]