Saskatoon’s Stefanie Lawton has secured her place in the 2013 Tim Hortons Roar of the Rings after defeating Team Jones, skipped by Kaitlyn Lawes, 6-4 in front of a record-breaking Saskatchewan crowd in the Women’s Final of the 2012 Capital One Canada Cup of Curling on Sunday morning. 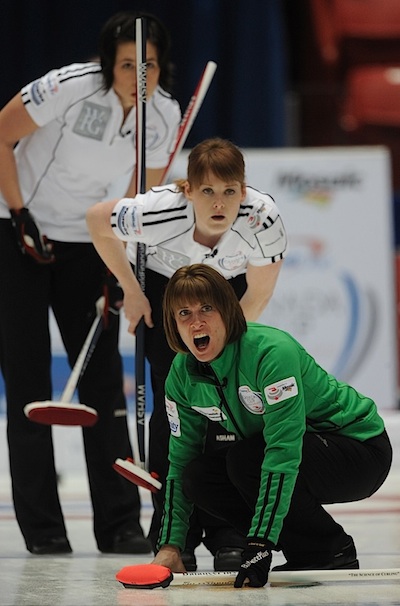 Lawton came straight into Sunday’s final after finishing first with a 5-1 record in round robin play, while the Jones team had to get past Heather Nedohin in the semi final – a game in which skip Kaitlyn Lawes curled 94 percent and won 9-5. After a blank end and a forced single in the second, Lawton, third Sherry Anderson, second Sherri Singler and lead Marliese Kasner controlled the play throughout most of the game. The momentum was in Lawton’s favour, and she was effective in shutting down any pressure from the Jones team whenever they tried to get rocks in play. A draw around two guards in the third end, assisted by sweepers Marliese Kasner and Sherri Singler, was a turning point for Lawton. But it was Lawton’s big weight shots – doubles in the second and third ends, and a controlled take-out through a port in the fifth – that gave her team the momentum and a 4-3 lead heading into the break. After the energy of the first five ends, the sixth produced a series of misses. With her last rock, Lawes drew partly around a guard to lie one, but Lawton replied with a hit to take the single. In the tenth, Lawes tried to get something going, but two impressive tick shots from Kasner and more of the same from Singler and Anderson kept the house open for Lawton to draw against 1 for the 6-4 victory – and a berth in the 2013 Tim Hortons Roar of the Rings next December in Winnipeg. “We had two good opportunities, and Stef was playing lights out. I mean, she made everything,” Lawes said after the game. “It was difficult to get things going. There was one end we didn’t bring one right to the tee-line to set up the deuce and left her the double, which she made. Then I hit and rolled out, and that was basically the game.” “It was an interesting year for us,” said Lawes, who has been handling the skipping duties while Jennifer Jones is on maternity leave. “[I] definitely learned a lot and we had a wonderful time playing with Kirsten [Wall]. It would have been nice to finish it off with her, but we’re happy with our week at the Canada Cup. To make the final is really satisfying.” The win propels Lawton straight into the Roar of the Rings, and that takes a lot of pressure off. “It’s huge,” she said, when asked what this victory meant to the team. “You count points all year – the last couple of years – to get that berth. We don’t have to worry about counting points, and where you’re ranking on the CTRS, that’s nice. For sure, that feels really good.” httpvh://www.youtube.com/watch?v=iYmtDSZcw9o With the Tim Hortons Roar of the Rings a year away, Lawton says that next twelve months will be spent working on team consistency in preparation for that all-important competition. “It feels pretty good,” she said about being the first three-time winner of the Canada Cup. “One of us was going to be a three-time winner here, but if definitely feels great to do that.” An enthusiastic pro-Saskatchewan crowd of 2,727 fans filled Mosaic Place in Moose Jaw to watch today’s Women’s Final, bringing total attendance numbers so far to 30,264, the most ever for a Capital One Canada Cup. The Men’s Final between Glenn Howard and Jeff Stoughton, who is still looking for a place in the 2013 Tim Hortons Roar of the Rings, gets started at 2:30 p.m. (3:30 p.m. ET). [flickr-gallery mode=”tag” tags=”2012cancupwf” tag_mode=”all”]