Around the House: NHL Players on the ice in Kelowna

The National Hockey League may still be out of action, but a group of NHL hockey players with some free time and a fundraising goal recently turned up in British Columbia to play on a different kind of ice – at the Kelowna Curling Club. In a charity event organized by Lauren Gerelus, partner of NHL Florida Panther Keaton Ellerby, the Kelowna Wives of the National Hockey League Players Association (NHLPA) hit the ice for a mini-spiel on Saturday, November 24, inviting spectators to watch the game and participate in autograph sessions and a silent auction, all in support of the Movember Foundation and Prostate Cancer Canada. 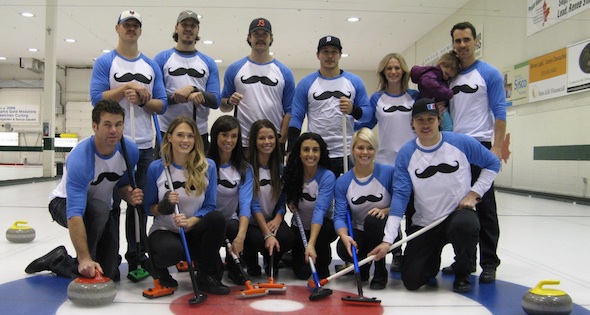 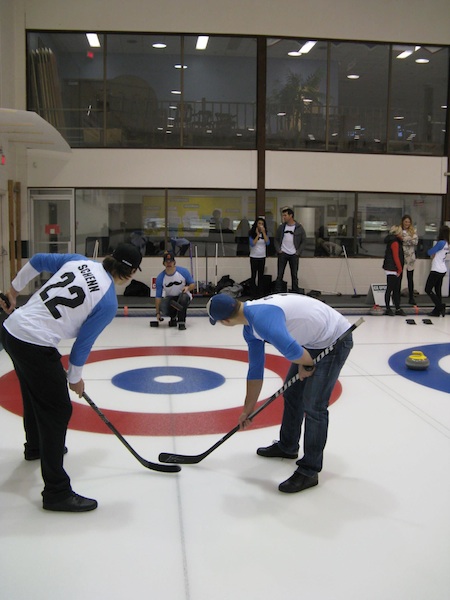 The event started as a simple fundraising challenge among friends, says Gerelus. “The idea to go curling was mine,” she says. “We originally were just going to write a $250 cheque per couple, and whoever won the curling match got to donate the money in their names to the Movember Foundation.” A good plan, but when Gerelus called the Kelowna Curling Club to find out about booking ice, club manager Jock Tyre suggested kicking the event up a notch and involving the community. “Jock’s idea sky rocketed with all of us when I asked if the guys would be willing to do autographs and photos with anyone who came to watch,” says Gerelus. “Donations would be encouraged if someone was looking for an autograph or a photo.” The wives and girlfriends organized a silent auction as well. “One thing Kelowna does really well is they really come together to help out in any fundraising event. Jock got hold of media and radio stations and from there things took off.” The players may have been curling novices, but according to reports on the NHLPA website, competition on the ice was fierce – and a few hockey sticks made an appearance as well. “None of us had curled before so it was pretty awesome to pick up a new sport that involves ice,” says Gerelus. “They [the hockey players] had a blast and picked up the game quickly, however we girls obviously had better form and skill!” 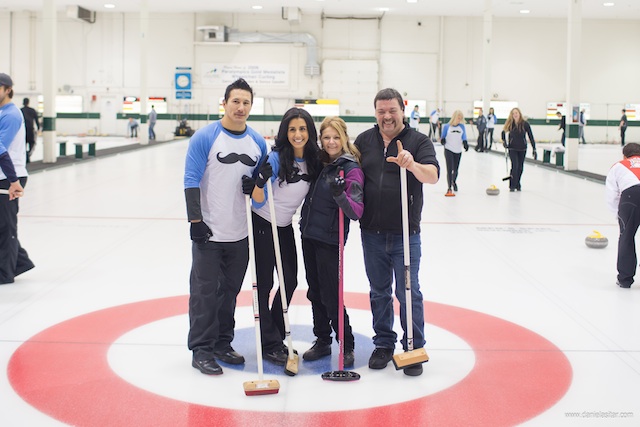 Lucky Lisa and Marshall Rudyk (right) won the draw to join Jordin Tootoo and partner Jen on the ice for the bonspiel (Photo Daniela Sitar, www.danielasitarphotography.com)

As an incentive, everyone who made a donation prior to the event was entered into a draw for the chance to join the players on the ice during their Saturday evening mini-spiel. Lisa and Marshall Rudyk were the lucky pair chosen to play on a team with Jordin Tootoo, but the real winner was the November Foundation. “Overall the night was a total success,” says Gerelus. “We ended up raising $5000.00 and 100 percent of the proceeds went to Movember.” Gerelus applauded the event volunteers as well as local Kelowna businesses, which donated services or products for the silent action, and the NHLPA, which provided some NHL jerseys for a raffle. But her biggest praise was reserved for Kelowna CC general manager Tyre, who took the idea and ran with it, contacting local media outlets and organizing a learn-to-curl for the NHL players before the spiel. “We couldn’t have done this without him. Jock has a heart of gold and covered every piece of ground he could to make this a total hit.” And since the event was such a success, Gerelus says there just might be a follow-up. “We have already started to plan something for next summer, so you’ll have to watch for that!” 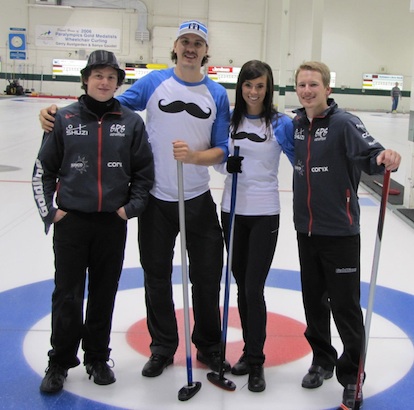 Keaton Ellerby and Lauren Gerelus were joined on the ice by a couple of curling ringers – Jason Gunnlaugson and Tyrel Griffith, of the Jim Cotter team (Photo courtesy Kelowna Curling Club) 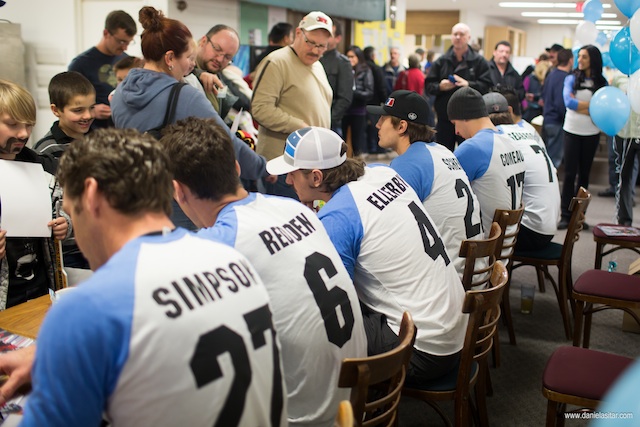 Spectators were invited to make a donation in return for an autograph (Photo Daniela Sitar, www.danielasitarphotography.com)