PENTICTON, B.C. — Team North America continues to build momentum at the World Financial Group Continental Cup, presented by Monsanto. The home team recorded a clean sweep of the three mixed doubles games on Saturday morning at the South Okanagan Events Centre in curling’s version of the Ryder Cup to take a 16-8 lead in the overall standings. The first team to claim 30.5 points out of the 60 available will win the WFG Continental Cup. Setting the tone on Saturday was the long-awaited debut of the North American pair of Jennifer Jones (skip, St. Vital CC, Winnipeg, Man.) and Brent Laing (second for Glenn Howard, Coldwater & District CC, Coldwater, Ont.). Jones and Laing had their first baby, daughter Isabella, in November, and in their first time playing together, they defeated Team World’s Torger Nergård (third for Thomas Ulsrud, Snarøen CC, Oslo, Norway) and Carmen Küng (second for Mirjam Ott, CC Davos, Davos, Switzerland) 7-5. 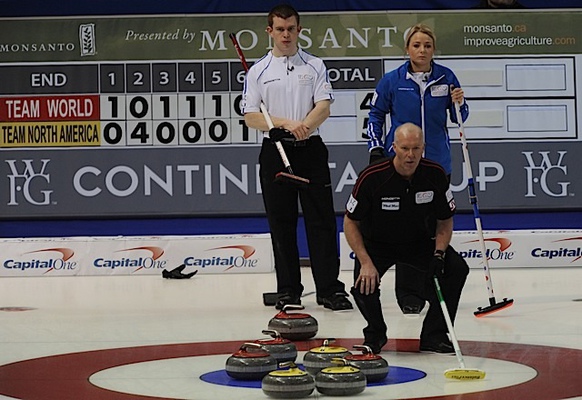 Teams throw five rocks per end, with one player throwing the first and fifth rocks of the end, while the teammate delivers the second, third and fourth rocks. For Team North America, Jones delivered the last rock, and there was never a doubt she would, said Laing with a smile. “Nope,” he said. “When you have somebody like Jen who’s made so many last shots, you might as well let her throw them. I haven’t thrown a last shot probably since I was 15, so I tried to avoid that.” “Brent and I practise a lot together so we knew what to expect,” added Jones. “He’s obviously super smart so he was really helping me out; he played outstanding. Absolutely, he took directions well. Like I told you, he’s smart.” In other morning play, Team North America’s Howard teamed with Natalie Nicholson (second for Allison Pottinger, St. Paul CC, St. Paul, Minn.) for a 9-4 triumph over Team World’s Greg Drummond (third for Tom Brewster, Curl Aberdeen, Aberdeen, Scotland) and Anna Sloan (third for Eve Muirhead, Dunkeld CC, Dunkeld, Scotland), stealing deuces in the seventh and eighth ends. “It was a blast,” said Howard, the reigning world men’s champion. “It’s only the second (mixed doubles) game I’ve ever played; you’re sweeping, you’re jumping up and calling (after throwing the rock), you’re running around with your head cut off, but it’s a lot of fun. Nat was a great partner and I’d love to do this again.” The sweep was completed by the Team North America duo of Heath McCormick (skip, Ardsley CC, Ardsley-on-Hudson, N.Y.) and Jessica Mair (second for Heather Nedohin, Saville Sports Centre, Edmonton, Alta.), who cruised to a 9-3 win over Team World’s Sebastian Kraupp (third for Niklas Edin, Karlstads CK, Karlstad, Sweden) and Maria Prytz (third for Margaretha Sigfridsson, Skellefteå CK, Skellefteå, Sweden). “Fortunately it went our way right from the start and we kept the pressure on them,” said McCormick. “In the middle with Jessica’s three shots, she was making them all and it makes it pretty easy on me.” Action at the WFG Continental Cup continues this afternoon with the final women’s team draw of the competition, with Team World trying to muster up some energy despite being ravaged by a stomach bug that is taking its toll on the team. “There’s nothing we can do,” said Team World captain David Hay. “We just have to toughen up and hang in there and compete. This thing hinges on Sunday’s (skins) games. We’ve got to try to stem the flow of points going to the North Americans as quickly as we can. If we can get out of today . . . that would be great for us.” httpvh://www.youtube.com/watch?v=x–1QR4WzR8 There will be six more traditional team games (three men’s, three women’s), each worth one point for a win, and one-half point for a tie. All games are eight ends and there are no extra ends. For the six mixed doubles and six singles matches, one point will also be awarded for each victory, one-half point if tied. The six skins games (two mixed, two women’s and two men’s) on Sunday will offer a total of five points per game, with the first six ends of each game worth one-half point each, while the seventh and eighth ends are worth one point each. In skins, a count of at least two with last rock or a steal is required in order to win an end. Otherwise, the points carry over. The winning side receives $52,000 Cdn ($2,000 per member, including captain and coach), while the losing side gets $26,000 ($1,000 per member, including captain and coach). As well, the side that generates the highest points total from the final three skins games will receive an additional $13,000 ($500 per player, plus captain and coach). Each side has won four Continental Cups; Team World prevailed last year in Langley, B.C. Here is the remainder of schedule for the first three days of the competition; matchups for the six skins-format games that could decide matters on Sunday will be determined when the respective coaches and captains (coach Rick Lang of Thunder Bay, Ont., and captain Kelley Law of Coquitlam B.C., for Team North America; coach Peja Lindholm of Östersund, Sweden, and captain David Hay of Perth, Scotland, for Team World) meet on Saturday afternoon. SATURDAY, Jan. 12 1:30 p.m. PST Women’s Team Sheet A: Team North America/Jennifer Jones (St. Vital CC, Winnipeg, Man.) vs. Team World/Eve Muirhead (Dunkeld CC, Dunkeld, Scotland) Sheet B: Team North America/Allison Pottinger (St. Paul CC, St. Paul, Minn.) vs. Team World/Margaretha Sigfridsson (Skellefteå CK, Skellefteå, Sweden) Sheet C: Team North America/Heather Nedohin (Saville Sports Centre, Edmonton, Alta.) vs. Team World/Mirjam Ott (CC Davos, Davos, Switzerland) 6:30 p.m. Men’s Team Sheet A: Team North America/Kevin Martin (Saville Sports Centre, Edmonton, Alta.) vs. Team World/Thomas Ulsrud (Snarøen CC, Oslo, Norway) Sheet B: Team North America/Heath McCormick (Ardsley CC, Ardsley-on-Hudson, N.Y.) vs. Team World/Tom Brewster (Club Aberdeen, Aberdeen, Scotland) Sheet C: Team North America/Glenn Howard (Coldwater & District CC, Coldwater, Ont.) vs. Team World/Niklas Edin (Karlstads CK, Karlstad, Sweden) [flickr-gallery mode=”tag” tags=”2013concupd7″ tag_mode=”all”] Other information: • For ticket and other event information, visit www.curling.ca/championships/continentalcup. • TSN, the exclusive television network for the Canadian Curling Association’s Season of Champions, and French language sports network RDS/RDS2 will provide complete coverage of this year’s World Financial Group Continental Cup, from the Opening draw (Women’s Team games) on Thursday morning through to and including the final Skins games on Sunday. • The World Financial Group Continental Cup is a joint venture of the Canadian Curling Association, United States Curling Association and World Curling Federation. • Media inquiries for other story ideas can be directed to: Al Cameron Director, Communication and Media Relations Canadian Curling Association 403-463-5500 [email protected] www.curling.ca