PENTICTON, B.C. — The World Financial Group Continental Cup has returned to North America. A year after losing to Team World in curling’s version of the Ryder Cup, Team North America took back the Cup with a convincing victory at the South Okanagan Events Centre. 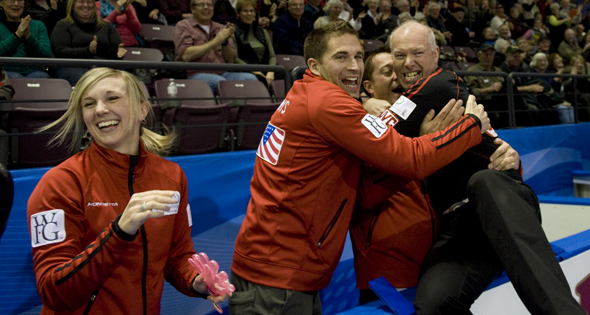 The home team clinched the WFG Continental Cup, presented by Monsanto, with three victories in the final skins session of the four-day competition to finish off a 37-23 victory. “I’m just ecstatic,” said Team North America skip Glenn Howard (Coldwater & District CC, Coldwater, Ont.), who sealed the victory with a three-point skin in the sixth end of his game against Team World’s Thomas Ulsrud (Snarøen CC, Oslo, Norway), setting off a wild celebration with his teammates. “We had a terrific game, curling wise, and getting along-wise we had so many great times. You feel part of a bigger team, 24 players instead of just four and it’s that what’s more satisfying, playing for a bigger team.” In addition to the trophy, the North American team, coached by Rick Lang (Thunder Bay, Ont.) and captained by Kelley Law (Coquitlam, B.C.), received $52,000 Cdn ($2,000 per member, including captain and coach). As well, for winning the most points from the final three skins games on Sunday night, Team North America won a $13,000 bonus ($500 per player, plus captain and coach). Howard won his men’s skins game 3-2. In the other final-round games, Team North America’s Jennifer Jones (St. Vital CC, Winnipeg, Man.) beat Team World’s Mirjam Ott (CC Davos, Davos, Switzerland) 4-1, while Team North America’s Kevin Martin (Saville Sports Centre, Edmonton, Alta.) prevailed 3.5-1.5 over Team World’s Eve Muirhead (Dunkeld CC, Dunkeld, Scotland). “It was so fun to win today; I pretty much could tell you every shot that was played on the other sheets,” said Jones. “It was really exciting to watch, and when Glenn made that shot, it was crazy, it was super fun.” The four-day event featured games in traditional team play, mixed doubles, singles and skins; in the latter, each game offered five points total, with the first six ends of each game worth one-half point each, while the seventh and eighth ends are worth one point each. In skins, a count of at least two with last rock or a steal is required in order to win an end. Otherwise, the points carry over. Team North America held a healthy lead going into the final day, but with 30 points available from the six skins games, there was the opportunity for a final-day comeback. It didn’t happen, which allowed Team North America to avenge last year’s defeat in Langley, B.C. “Well, it feels awesome,” said Law, who played on the first Continental Cup Team North America championship team in 2002. “It’s unbelievable; they played so well all week, and it makes my job so much easier. They were on a roll out there, they were so pumped and supporting each other and making great shots.” Team World, with coach Peja Lindholm (Östersund, Sweden) and captain David Hay (Perth, Scotland), settled for the runner-up prize of $26,0 ($1,000 per member, including captain and coach). “We just didn’t play too well,” said Hay. “In a few games we failed in pretty much the last end with several of our last shots and you just can’t afford to do that. These guys played very well. It just wasn’t to be our week. We weren’t a mile off the pace, just a fraction. They (Team North America) played very well, the big guns were firing all guns tonight, and the North Americans played exceptionally well here. They deserved to win.” httpvh://www.youtube.com/watch?v=hPo9qf6Uanc The winning North American squad featured teams skipped by Martin, Howard, Jones, Heath McCormick (Ardsley CC, Ardsley-on-Hudson, N.Y.), Heather Nedohin (Saville Sports Centre, Edmonton, Alta.) and Allison Pottinger (St. Paul CC, St. Paul, Minn.). For two players on Pottinger’s team, third Nicole Joraanstad and second Natalie Nicholson, it was their fourth Continental Cup victory. The losing World squad consisted of teams skipped by Ulsrud, Muirhead, Ott, Tom Brewster (Curl Aberdeen, Aberdeen, Scotland), Niklas Edin (Karlstads CK, Karlstad, Sweden) and and Margaretha Sigfridsson (Skellefteå CK, Skellefteå, Sweden). The teams entered the 2013 WFG Continental Cup having each won four titles going back to the first event in 2002 in Regina. Team World won last year’s event in Langley, B.C. Next year’s event will be the first WFG Continental Cup staged outside of Canada; it will be be staged Jan. 16 to 19, 2014, at the Orleans Arena in Las Vegas. [flickr-gallery mode=”tag” tags=”2013concupd11″ tag_mode=”all”]