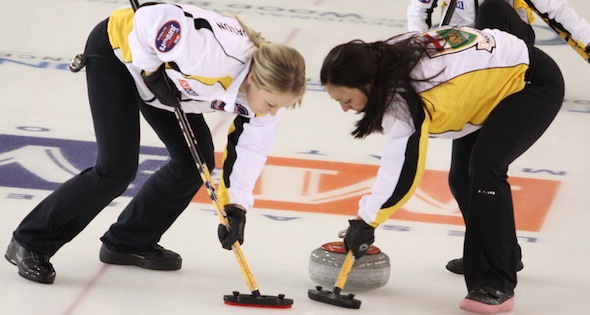 In a battle of 3-0 women’s teams, Winnipeg’s Shannon Birchard, the 2012 silver-medallist at this event, was an 8-3 winner over Ontario’s Jamie Sinclair (Manotick), while on the men’s side, Matt Dunstone’s Winnipeg quartet improved to 3-1 with an 8-2 triumph over Quebec’s Félix Asselin (Montreal). The women’s game turned when Birchard (backed up by third Nicole Sigvaldason, second Sheyna Andries, lead Mariah Mondor and coach Bruce Birchard) took two in the fifth end and stole three more in the sixth. The victory all but assures that the Manitobans will be moving on to the championship round, the second phase of the round-robin draw, which begins Wednesday. “We played really well; the team played great,” said Birchard. “It was a big game, especially to get that first-place spot in our pool so far. Hopefully we can keep that going in the rest of our round-robin games. It’s definitely a big boost of confidence.” In the other women’s game, Northern Ontario’s Tirzah Keffer (Thunder Bay) took four in the second end and cruised home with an 11-6 win over Prince Edward Island’s Veronica Smith (Cornwall). The Manitoba men took control of their game early, stealing their first five points of the game (one in the first, three in the second, one more in the third). 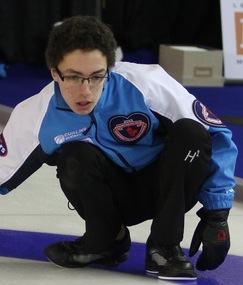 Quebec skip Félix watches the line of a rock at the Canadian Juniors. (Photo, CCA/LuLu Photography)

“It was our best game so far; the boys really came to play today,” said Dunstone, whose team is rounded out by third Colton Lott, second Daniel Grant, lead Brendan MacCuish and coach Scott Grant. “We knew it was a huge game going into it; we knew it was a must-win or we’d be up against the wall the rest of the way. Luckily for us, we got all the breaks and it worked out. It’s the best game we’ve played all year. The guys didn’t miss anything.” The only other men’s game saw New Brunswick’s Josh Barry (Fredericton) improve to 4-0 and likely book a spot in the championship round with a 13-5 win over Northern Ontario’s Matthew Roberts (Thunder Bay). The 2013 M&M Meat Shops Canadian Juniors continue on Monday with two more draws, set for 2 p.m. (all times MST) and 7 p.m. Live scoring is available at www.curling.ca/championships/juniors/scores-and-standings/standings-2013-juniors/. With 14 teams in each gender (representing each of the 10 provinces in addition to Northern Ontario, the Northwest Territories, Yukon and Nunavut), a new format is being used this year that has the field split into two seven-team pools, with seeding based on win-loss records at the Canadian Juniors over the past three years. Teams will play a round robin within their pool, leading to a championship pool beginning on Wednesday, which will then lead to the weekend playoffs. Teams that don’t qualify for the championship pool will play a seeding pool to determine rankings for the 2014 Canadian Juniors in Liverpool, N.S. Meantime, non-playoff teams will participate in a mixed doubles competition.