Alberta Scotties final goes down to the wire

The second Alberta team destined for the 2013 Scotties Tournament of Hearts was determined Jan. 23-27 at the Lethbridge Curling Club, with Kristie Moore taking the title in an extra-end victory. 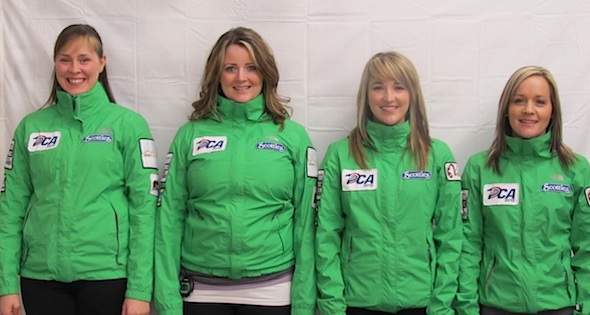 The Moore squad, playing out of the Grande Prairie Curling Club, will join Team Canada, skipped by Edmonton’s Heather Nedohin, at the Scotties Feb. 16-24 in Kingston. Moore took the tough road to the final after losing her first two games. But the team rebounded with six straight victories including a convincing playoff win over four-time provincial champ Shannon Kleibrink and another in the semifinal facing Laura Crocker. In the final, Renee Sonnenberg, Alberta’s representative at the 1999 and 2001 Scotties, scored a deuce in the 10th to force the extra end. It came down to the last rock and Moore made it count with a draw to bite the button and clinch the title. It marks the second trip to the national championship for Moore who played second for Nedohin at the 2000 Scotties. Teammates Blaine de Jager, Michelle Dykstra and Amber Cheveldave will be making their debut appearance. “You Gotta Be There” in Kingston’s K-Rock Centre for the 2013 Scotties Tournament of Hearts. Tickets to see the top teams in the country are available now by clicking here.