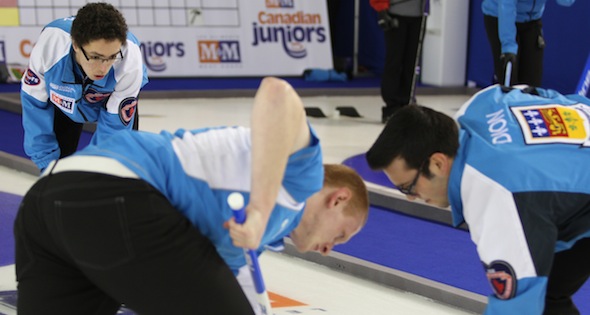 So when it was needed most, Asselin’s team (third Marc-Alexandre Charest-Dion, second Lewis South, lead Sami Guimond-Jaber and coach Benoit Forget) delivered one of its best performances of the event, a clutch 6-4 win over Northern Ontario’s Matthew Roberts (Thunder Bay) to clinch a berth in the championship round robin, beginning on Wednesday. Both teams entered the game with 2-3 records; the winner would move on, the loser would play the rest of the week in the seeding round robin, to determine the final rankings for next year’s event in Liverpool, N.S., and with no hope of participating in the weekend playoffs. “We had to win or else we wouldn’t make the next round,” said Asselin, who came back from a disappointing loss to Nova Scotia’s Stuart Thompson earlier on Tuesday. “We bounced back from that loss earlier. It’s fun to win. We kept our cool; we knew it wasn’t going to be an easy game coming back from a loss.” Now Quebec is part of an eight-team championship round-robin that will play Wednesday and Thursday — the top four teams from Pool A vs. the top four teams from Pool B, with the records from the first phase of the competition carrying over. The top three teams will make the weekend playoffs, with the first-place team advancing to Saturday’s final, and the second- and third-place teams meeting in the semi. “We can’t afford another loss,” said Asselin. “I don’t think four losses will make it, so we have to win every game and bring those teams back to us. But we’re in the next round and it’s fun to be in there.” The other seven teams still in the hunt for the playoffs: Nova Scotia (5-1), New Brunswick’s Josh Barry (5-1, Fredericton), Ontario’s Aaron Squires (5-1, St. Thomas), Alberta’s Thomas Scoffin (5-1, Edmonton), Saskatchewan’s Brady Scharback (4-2, Saskatoon), Manitoba’s Matt Dunstone (4-2, Winnipeg) and B.C.’s Tyler Klymchuk (3-3, Victoria/Langley). In the other Tuesday evening men’s games, Alberta beat B.C. 9-5; Manitoba knocked off New Brunswick 10-5; Ontario was a 10-1 winner over Nunavut’s David Kakuktinniq (Rankin Inlet); and Nova Scotia beat Daniel Murray of the Northwest Territories (Yellowknife) 9-2. 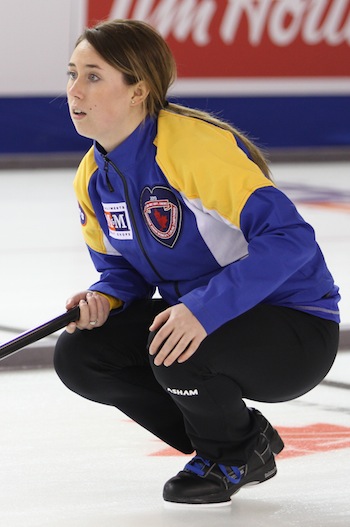 The women’s situation was less clear; both pools required tiebreakers to determine the final four teams to advance to the championship round. In Pool B, the Northwest Territories’ Carina McKay-Saturnino took a first step to a berth in the final eight with a 10-5 tiebreaker win over Northern Ontario’s Tirzah Keffer. The Territories advance to play Quebec’s Sarah Dumais (St-Romuald) at 8 a.m. on Wednesday for the fourth and final Pool B berth; those three teams all finished with 2-4 records. Manitoba’s Shannon Birchard (6-0, Winnipeg), Ontario’s Jamie Sinclair (5-1, Manotick) and Nova Scotia’s Mary Myketyn-Driscoll (3-3, Truro) all locked up spots in the championship round-robin from Pool B. In Pool A, Alberta’s Karynn Flory’s team from Edmonton was in must-win territory on Tuesday night, and she and her teammates (third Holly Jamieson, second Klara Smiley, lead Katie Roskewich, coach Andrea Procter) delivered with a 10-4 win over New Brunswick’s Jessica Daigle (Fredericton). As a result, Alberta (3-3) will be part of a four-team tiebreaker for the final two championship round berths; B.C.’s Corryn Brown (5-1, Kamloops) and the Yukon’s Sarah Koltun (4-2, Whitehorse) have advanced. In the Pool A tiebreakers at 8 a.m. on Wednesday, Alberta will take on New Brunswick, while Saskatchewan’s Jessica Hanson (Saskatoon) plays Newfoundland/Labrador’s Carolyn Suley (St. John’s). Earlier in the day, Alberta lost to Newfoundland/Labrador, putting the pressure on for its evening game. “It was good to come back that way after this afternoon, for sure,” said Flory. “It was really tough, but you can’t think about the last game. You just have to ignore the shots you missed and move on. I think we’ll be ready. After this game, we have our confidence back.” In the other women’s games, Saskatchewan clinched its tiebreaker berth with an 8-6 extra-end win over the Yukon; Manitoba remained the lone unbeaten team with an 11-2 win over Nova Scotia; and Ontario beat P.E.I.’s Veronica Smith (Cornwall) 12-4. Once the tiebreakers are complete on Wednesday, the championship and seeding rounds will get underway, with draws at 1 p.m. and 6 p.m. Live scoring and updated standings are available at www.curling.ca/championships/juniors/scores-and-standings/standings-2013-juniors/. The updated draw, for both the championship pool and the seeding pool, will be available at www.curling.ca/championships/juniors/draw-schedule/ once the tiebreakers are complete. The top three teams after the championship round robin concludes on Friday will qualify for the playoffs; the first-place teams will move onto the final, while the second- and third-place teams will meet in the semifinals. TSN/RDS, the official broadcaster of the CCA’s Season of Champions, will provide live coverage across Canada of the men’s and women’s finals from the CNRL Arena 2. The men’s final is scheduled for 5 p.m. MT Saturday, Feb. 9, while the women’s final goes Sunday, Feb. 10, at 5 p.m. MT as well.