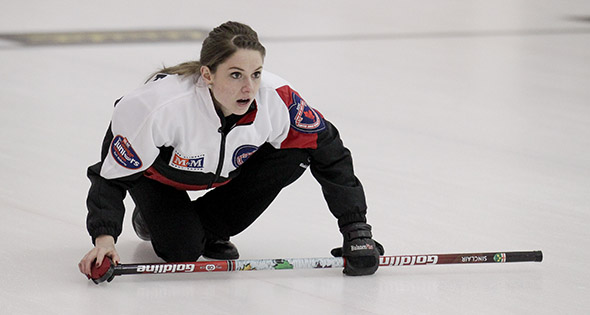 Jamie Sinclair and her Ontario team won a tiebreaker on Friday afternoon to qualify for Sunday’s semifinal at the 2013 Canadian Juniors. (Photo, CCA/Mark O’Neill)

Manitoba’s Matt Dunstone (Winnipeg) on the men’s side and Ontario’s Jamie Sinclair (Manotick) on the women’s side both won third-place tiebreakers on Friday afternoon at the Suncor Community Leisure Centre to clinch berths in the weekend semifinals. The Ontario women (third Holly Donaldson, second Katelyn Wasylkiw, lead Erin Jenkins, coach Graham Sinclair) ended a run of frustrating losses with a 6-5 win over the Yukon’s Sarah Koltun (Whitehorse), ending the Yukon’s bid to make the junior women’s playoffs for the first time since the Yukon and Northwest Territories started sending separate teams. Earlier in the day, the Yukon blew out Ontario 10-3, and on Thursday night, Ontario gave up three in the 10th end to lose 11-10 to B.C.’s Corryn Brown. “I think I’ve gone through every single emotion possible,” said Sinclair after her team’s win. “I’m happy that it’s done with and we’re moving on to the semis.” Ontario will play Manitoba’s Shannon Birchard (Winnipeg) in the semifinal Sunday at 10:30 a.m. (all times MST), with the winner moving on to play B.C. in the gold-medal game Sunday at 5 p.m. “Our team went through a lot this morning; it was a terrible game,” said Sinclair. “It was not for us. We kind of broke down after that, but our ability to regroup, come out here and control the whole game, I think that says a lot about the personalities on our team. We’re really excited. We’re definitely happy with the way things are going, and after this game, we’re feeling a little more confident.” 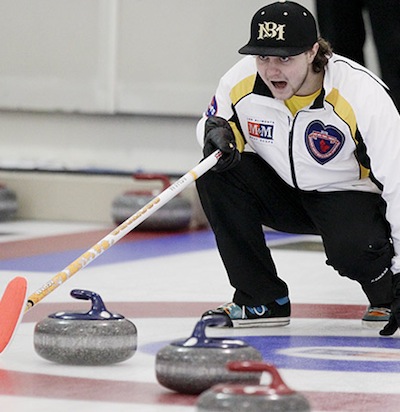 The Manitoba men, meanwhile, endured a draining day that saw them pull out a pair of unexpected victories. In their final round-robin game on Friday morning, Saskatchewan skip Brady Scharback (Saskatoon) just had to touch paint in the 10th end to score three for a victory, but was heavy; Dunstone scored in the extra end for the win. Then, against Ontario’s Aaron Squires, Manitoba could only watch as Ontario last-rock thrower Jason Camm had an open hit to force an extra end but was narrow and wrecked, giving Manitoba the stolen victory. “Let’s hope that doesn’t happen again,” said Dunstone, who’s backed up by third  Colton Lott, second Daniel Grant, lead Brendan MacCuish and coach Scott Grant. “That’s a lot for all of us to take in one sitting. We’re just glad to still be going.” Manitoba will take on Nova Scotia’s Stuart Thompson (Halifax) in the semifinal on Saturday at 10:30 a.m. The winner moves into the championship game against Alberta’s Thomas Scoffin (Edmonton) at 5 p.m. “It’s not over yet, right? We’re not done with this thing until we lose and we’re out,” said Dunstone. “There’s still lots of work to be done, and we’re looking forward to it. They’re (Nova Scotia) a great team. We’re going to have to be on top of our game if we hope to make that final.” The six teams in each gender that didn’t qualify for the championship round played a seeding round robin to determine final rankings for next year’s Canadian Juniors in Liverpool, N.S. In the final round of men’s seeding games, Daniel Murray of the Northwest Territories (1-8, Yellowknife) defeated Nunavut’s David Kakuktinniq (0-9, Rankin Inlet); and Newfoundland/Labrador’s Adam Boland (4-5, Gander) was an 8-6 victor over P.E.I.’s Tyler Smith (3-6, Cornwall). In women’s games, Newfoundland/Labrador’s Carolyn Suley (6-3, St. John’s) beat Carina McKay-Saturnino of the Northwest Territories (Inuvik, 3-6) 8-4; Alberta’s Karynn Flory (5-4, Edmonton) was a 7-5 winner over Northern Ontario’s Tirzah Keffer (3-6, Thunder Bay); and P.E.I.’s Veronica Smith (3-6, Cornwall) turned back Nunavut’s Sadie Pinksen (0-9, Iqaluit) 11-3. Live scoring and updated standings are available at www.curling.ca/championships/juniors/scores-and-standings/standings-2013-juniors/.