FORT McMURRAY, Alta. — Sarah Koltun has her Yukon team on the verge of an historic achievement at the M&M Meat Shops Canadian Junior Men’s and Women’s Curling Championships. 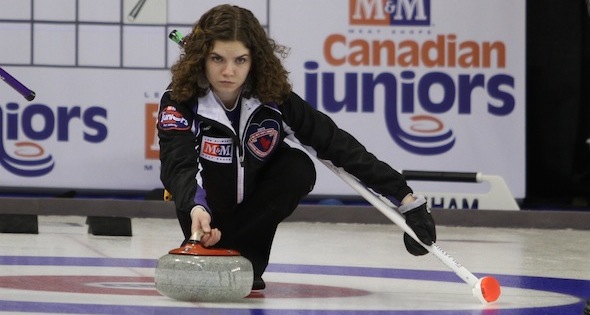 Yukon skip Sarah Koltun of Whitehorse is one win away from the playoffs at the 2013 Canadian Juniors. (Photo, courtesy LuLu Photography)

With the victory, the Yukon finished with a 7-3 round-robin record, tied with Ontario, meaning the teams will play a tiebreaker at 1 p.m. (all times MST) today for the third and final playoff berth. No women’s team from the Yukon has ever made the playoffs at the Canadian Juniors. “It’s incredible,” said Koltun, who’s skipped at the past six Canadian Juniors (Chelsea Duncan has been her third on all six occasions); her best previous result was a 6-6 finish in 2011 at Calgary. “This is something we’ve been striving for for seven years. It’s great to feel that all the hard work is paying off. One more game and then we’ll be there.” The fact that the Yukon will face the same team in the tiebreaker that it beat convincingly a few hours earlier doesn’t hurt, suggested Koltun. “It’s good to get that win, especially against them,” she said. “Hopefully it’ll give us that boost we need going into the next game. We can only control ourselves right now; we know this gives us a boost of confidence to know that if we play as well as we just did, or even better, then we should have a good shot at getting to the semifinal.” The winner of the tiebreaker will play Manitoba’s Shannon Birchard (9-1, Winnipeg) in the semifinal on Sunday at 10:30 a.m. The winner there will move on to the gold-medal game against B.C.’s Corryn Brown (9-1, Kamloops) Sunday at 5 p.m. In the other women’s championship-round games, New Brunswick’s Jessica Daigle (4-6, Fredericton) beat Nova Scotia’s Mary Myketyn-Driscoll (3-7, Truro) 10-6; and Saskatchewan’s Jessica Hanson (5-5, Fredericton) turned back Quebec’s Sarah Dumais (3-7, St-Romuald) 9-3. 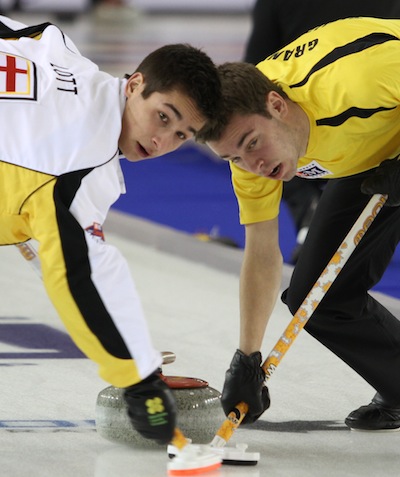 There will also be a men’s tiebreaker at 1 p.m. between Manitoba’s Matt Dunstone (Winnipeg) and Ontario’s Aaron Squires (St. Thomas) after both teams finished the round robin with 7-3 records. Ontario had a bye on Friday morning, while Dunstone’s Manitoba champs (third Colton Lott, second Daniel Grant, lead Brendan MacCuish, coach Scott Grant) won in dramatic fashion over Saskatchewan’s Brady Scharback (Saskatoon) in a game that decided which team would face Ontario in the tiebreaker. Scharback had a draw for a winning three in the 10th end after Dunstone missed two shots due to picks, but the Saskatchewan skip was heavy with his draw and settled for two to force the extra end. In the extra, Dunstone made an open hit for the victory. “They got their breaks, we got ours (in the 10th end), said Dunstone. “It went both ways; it just went a little better for us. Now, we’ll just go out and play with nothing to lose, right? Nobody was really expecting us to win, and we know that. We’re just playing with nothing to lose and whatever happens, happens.” The winner of the Manitoba-Ontario tiebreaker will play Nova Scotia’s Stuart Thompson (8-2, Halifax) in the semifinal on Saturday at 10:30 a.m., with the winner moving onto the gold-medal game against Alberta’s Thomas Scoffin (9-1, Edmonton) at 5 p.m. on Saturday. In the other men’s game, B.C.’s Tyler Klymchuk (4-6, Langley/Victoria) beat Quebec’s Félix Asselin (3-7, Montreal) 8-5. Live scoring and updated standings are available at www.curling.ca/championships/juniors/scores-and-standings/standings-2013-juniors/. The updated draw, for both the championship pool and the seeding pool, is available at www.curling.ca/championships/juniors/draw-schedule/. TSN/RDS, the official broadcaster of the CCA’s Season of Champions, will provide live coverage across Canada of the men’s and women’s finals.