FORT McMURRAY, Alta. — Matt Dunstone has brought the Canadian junior men’s curling championship back to Manitoba for the first time in 11 years. 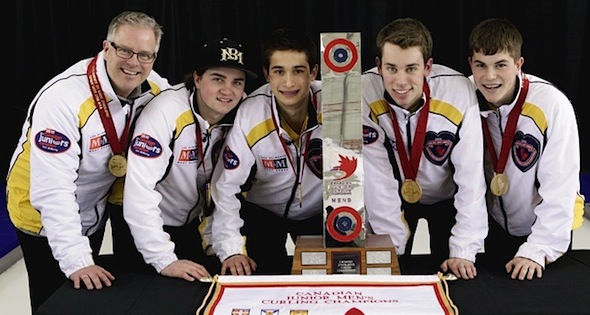 Dunstone’s team from Winnipeg claimed the gold medal on Saturday night with a 4-3 win over Alberta’s Thomas Scoffin (Edmonton) in the men’s final of the 2013 M&M Meat Shops Canadian Junior Championships at the Suncor Community Leisure. “It’s a dream come true,” marvelled Dunstone, moments after his 10th-end double takeout for the victory. “There are still no words to explain it. It’s hard to believe.” Dunstone’s Manitoba team —  third Colton Lott, second Daniel Grant, lead Brendan MacCuish and coach Scott Grant — led 3-1 after six ends, but Alberta rallied to tie the game with one in the eighth end and a stolen point in the ninth thanks to a marvellous freeze from Scoffin on his final delivery. In the 10th, Alberta got a break when a Manitoba peel attempt on Dunstone’s first delivery nudged one of Alberta stones in the house to bite the button, corner-frozen to a Manitoba rock. Scoffin played a freeze to his own frozen rock, but the preferred alignment was just off and Dunstone played a peel-weight double takeout for the win. “They’re a good team; you knew they were going to come back on us,” said Dunstone, 17. “We were never comfortable with our two-point lead. We knew we had to play well in all 10 ends, and thankfully his last rock overcurled by just a hair and we had a shot to win.” “We missed a few key shots in that game and that was the difference,” said Scoffin, who was skipping in his seventh Canadian Juniors but his first for Alberta (the previous six were with the Yukon). “He made a great shot, he’s been making those all week. We had to give him a tough one; my last shot overcurled by a couple inches, and that’s the way it is.” 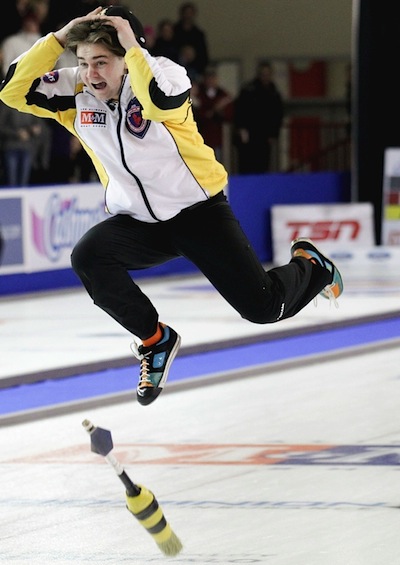 It was Manitoba’s first gold medal since 2002, when Winnipeg’s David Hamblin claimed the Canadian title at Summerside, P.E.I., and the seventh Canadian junior men’s title won by a Manitoba team. “That’s what makes it even more special, is that we’re the first team to win it in a long time,” said Dunstone. “We look forward to representing Canada as best as we can.” Dunstone capped a marvellous run that saw him prevail in a pair of must-win games on Friday — over Saskatchewan’s Brady Scharback (Saskatoon) in the last game of the round robin and against Ontario’s Aaron Squires (St. Thomas) in a third-place tiebreaker — before turning on the jets for a 9-4 win over Nova Scotia’s Stuart Thompson (Halifax) in the semifinal earlier on Saturday. The Manitobans will represent Canada at the World Juniors, Feb. 28-March 10, 2013, in Sochi, Russia, which will serve as a test event for the 2014 Winter Olympics curling competition. Canada has won a leading 17 world junior men’s titles since 1975 and eight women’s crowns (one behind Scotland) since 1988. The last Canadian teams to win world junior titles were skipped by Saskatchewan’s Marliese Kasner (Miller) in 2003 in Flims, Switzerland, and by Alberta’s Brendan Bottcher last year. In Russia, Dunstone will get a chance to wear Canadian colours like his idol, two-time world men’s champ Jeff Stoughton. “Ever since I was three years old, I was on the kitchen floor imitating Jeff Stoughton,” said Dunstone, who throws from similar Manitoba tuck position to Stoughton, and even smacks his old-school taped-up corn broom on the ice before throwing a rock, just like Stoughton. “Now, here we are — we get to go to Sochi, Russia, with a Maple Leaf on our back. It’s a great feeling.” The loss ended a bid for back-to-back gold medals for Alberta at the Canadian Juniors. Scoffin’s teammates lead Bryce Bucholz and second Landon Bucholz were members of the Bottcher team that won the Canadian and world junior titles in 2012. The silver-medal Alberta team was rounded out by third Dylan Gousseau and coach Rob Bucholz. “I don’t know what to feel right now,” said Scoffin. “Obviously, you come here to win. Only one team wins at the end of the week, and congratulations to them. They’ll be great representatives. But it’s heartbreaking right now.” Dunstone’s grandparents, Jim and Carol, the 1980 Canadian mixed curling champions and recent inductees to the Manitoba Curling Hall of Fame, were part of the packed house in Fort McMurray. The women’s playoffs are set for Sunday, with Manitoba’s Shannon Birchard (Winnipeg) playing Ontario’s Jamie Sinclair (Manotick) at 10:30 a.m., with the winner playing B.C.’s Corryn Brown (Kamloops) for the gold medal at 5 p.m. (televised by TSN/RDS2). Live scoring is available at www.curling.ca/championships/juniors/scores-and-standings/standings-2013-juniors/.