Corryn Brown has ended a quarter-century of frustration for British Columbia at the M&M Meat Shops Canadian Junior Men’s and Women’s Curling Championships. 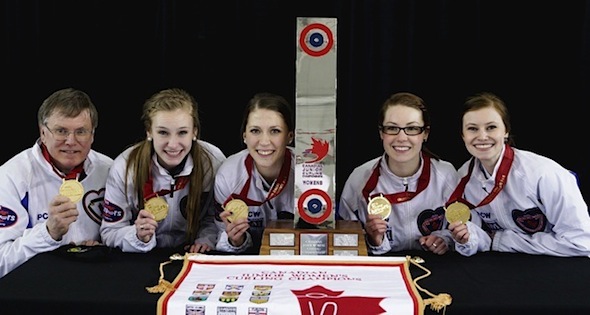 Brown’s Kamloops team defeated Manitoba’s Shannon Birchard (Winnipeg) 6-3 on Sunday night at the Suncor Community Leisure Centre in the women’s gold-medal game of the 2013 Canadian Juniors. It was B.C.’s first victory since 1987 at Prince Albert, Sask., when Julie Sutton (Skinner) won her second straight Canadian title (she played third a year earlier for her sister Jodie). It was the fourth gold medal for a B.C. team at the event, and second for a Kamloops entry; Sandra Plut won in 1982 at Winnipeg. With the victory, Brown’s team of 17-year-olds — third Erin Pincott, second Sam Fisher and lead Sydney Fraser, along with coach Ken Brown, will represent Canada at the World Juniors, Feb. 28 to March 10 in Sochi, Russia. 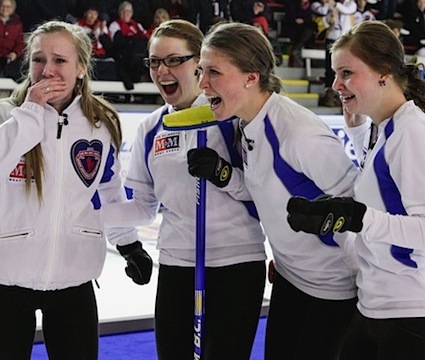 “It feels incredible,” said Brown. “It hasn’t really sunk in too much right now. But it’s just unbelievable. Going to Russia is going to be incredible, and having the Maple Leaf on our back is going to be even better. I could not be more proud of these girls.” It will be Brown’s second chance to wear the Maple Leaf overseas. In 2012, she won a bronze medal with the Canadian mixed team (skipped by Thomas Scoffin, who lost the men’s final here on Saturday) at the inaugural Youth Winter Olympics in Innsbruck, Austria. “I just can’t wait for these girls to experience this for themselves,” said Brown. It’s also the team’s second Canadian gold medal; the same lineup captured the gold medal at the 2011 Canada Winter Games in Halifax. It was a tight first five ends, with B.C. taking a 1-0 lead with a single point in the fourth when Brown made an open hit while looking at three Manitoba counters. In the sixth, though, Birchard, 18, was able to make a cold draw to the four-foot to score two and take her first lead of the game. But B.C. answered right back in the seventh when Brown made a spectacular triple-takeout to score three and take a 4-2 lead. “We were fortunate enough to have that set up, and we thought the worst we can do if I miss it is give up one,” said Brown. “So we thought the benefits outweighed the risks. We tried and ended up making it.” The B.C. champs continued putting on pressure in the eighth end; Birchard was looking at five B.C. rocks in the rings, but coolly drew to bite a piece of the button to score one and cut the B.C. lead to 4-3. Brown made an open hit for a single in the ninth to restore her two-point lead going into the 10th end. In the 10th, Birchard had a runback double takeout to score two and force an extra end, but the raised rock jammed, giving B.C. a steal and the victory. “There was just so much moving at once, and then all of a sudden ours stopped just outside of the eight-foot, and we knew we won it,” said Brown. “It’s an incredible feeling to know that we did enough to pull out that win in the last end.” B.C.’s victory ended a three-year run in which the same province had swept both the men’s and women’s gold medals; Manitoba’s Matt Dunstone won the men’s final on Saturday. 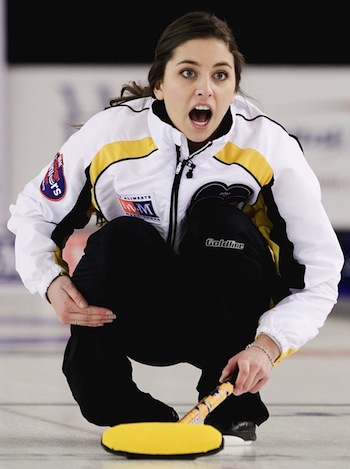 It was the second straight year that Birchard has finished second at the Canadian Juniors. She, along with lead Mariah Mondor, lost the final of last year’s Canadian Juniors to Alberta’s Jocelyn Peterman at Napanee, Ont. “It’s definitely heartbreaking,” she said. “Coming back into this, it was a way better final than last year. Just a couple missed shots here and there that really killed us. I was deep with my last shot in the seventh and set up that automatic triple for three. It was there all day and she was going to make it up, no matter what.” The 2013 silver-medal Manitoba team was rounded out by third Nicole Sigvaldason, second Sheyna Andries and coach Bruce Birchard. “They’re a great team and they’re going to represent the country really well in Sochi,” said Birchard. Two New Brunswick players who competed here have been named alternates for the Canadian teams in Sochi. Josh Barry will accompany The World Juniors in Sochi will serve as a test event for the 2014 Winter Olympics curling competition. Canada has won a leading 17 world junior men’s titles since 1975 and eight women’s crowns (one behind Scotland) since 1988. The last Canadian teams to win world junior titles were skipped by Saskatchewan’s Marliese Kasner (Miller) in 2003 in Flims, Switzerland, and by Bottcher last year.