FORT McMURRAY, Alta. — Manitoba’s Shannon Birchard will attempt to give her province a sweep of the gold medals at the 2013 M&M Meat Shops Canadian Junior Men’s and Women’s Curling Championships. 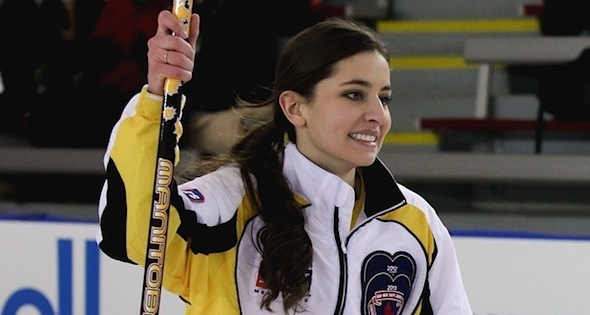 Birchard’s team from Winnipeg (third Nicole Sigvaldason, second Sheyna Andries, lead Mariah Mondor, coach Bruce Birchard) beat Ontario’s Jamie Sinclair (Manotick) 10-6 in an extra end in the semifinal on Sunday at the Suncor Community Leisure Centre. With the victory, the Manitoba champs advance to the gold-medal game later Sunday against British Columbia’s Corryn Brown (Kamloops), beginning at 5 p.m. MST (televised by TSN/RDS2). It will be a chance for Birchard and Mondor to take one step higher on the podium after they won a silver medal at the 2012 Canadian Juniors in Napanee, Ont., losing to Alberta’s Jocelyn Peterman in the final “We just have to be a lot calmer than we were last year,” said Birchard. “We started off shaky; we had trouble calming our nerves and we got ourselves into some trouble. There were a couple of strategy mistakes last year and hopefully we don’t make the same ones.” Manitoba scored four in the fifth end to take a 5-2 lead, but Ontario fought back with steals in the seventh and 10th ends to force an extra end. Birchard made a runback takeout for the victory. “It was a good game; everybody made lots of shots,” said Sinclair. “Just one bad end and we were trying to catch up after that.”

If Manitoba beats B.C., it would mark the fourth straight year that one province has swept the titles. Last year at Napanee, Alberta’s Brendan Bottcher and Peterman claimed gold; in 2011 at Calgary, it was Saskatchewan’s Braeden Moskowy and Trish Paulsen sweeping the championships; and in 2010 at Sorel-Tracy, Que., Ontario’s Rachel Homan and Jake Walker pulled off the sweep. The Manitoba women will be going for that province’s 10th Canadian junior women’s championship (second only to Saskatchewan’s 11), and first since Kaitlyn Lawes won the second of her back-to-back titles in 2009 at Salmon Arm, B.C. “We definitely have to play well in this next game,” said Birchard. “B.C. is a tough team and we’re going to have to come out firing. Hopefully this game serves as a bit of a warmup for later.” It would be the fourth time that Manitoba has swept the gold medals. The others were in 1995 at Regina (Chris Galbraith and Kelly MacKenzie [Scott]); in 1984 at Fort St. John, B.C. (Bob Ursel and Darcy Kirkness [Robertson]); and in 1981 at Dartmouth, N.S. (Mert Thompsett and Karen Fallis). Brown’s team, meanwhile, will be attempting to win B.C.’s fourth Canadian junior women’s crown, and first since 1987 at Prince Albert, Sask., when Julie Sutton (Skinner) won her second straight (she played third a year earlier for her sister Jodie). The winner of the gold-medal game will represent Canada at the World Juniors, Feb. 28-March 10, 2013, in Sochi, Russia, which will serve as a test event for the 2014 Winter Olympics curling competition. Canada has won a leading 17 world junior men’s titles since 1975 and eight women’s crowns (one behind Scotland) since 1988. The last Canadian teams to win world junior titles were skipped by Saskatchewan’s Marliese Kasner (Miller) in 2003 in Flims, Switzerland, and by Bottcher last year. Live scoring is available at www.curling.ca/championships/juniors/scores-and-standings/standings-2013-juniors/.