Canada’s most decorated wheelchair curler has a piece of advice for the rookies on the team that will compete at the 2013 World Wheelchair Curling Championship, beginning on Saturday in Sochi, Russia.

Team Canada lead Sonja Gaudet (Vernon, B.C.) has won two previous world championships to go along with two Paralympic Games gold medals, and will be participating in her sixth world championship. Vice-skip Dennis Thiessen (Sanford, Man.) and alternate Mark Ideson (London, Ont.), meanwhile, will be making their international debuts at the Ice Cube Curling Center in Sochi. “Oh, boy,” said Gaudet, when asked about what she might say to her new teammates. “Just go out and enjoy the experience and know that they’re travelling with a group of people who’ve been there a few times; there’s a lot of comfort in that. Mark and Dennis are awesome teammates, awesome curlers — they are going to fit right in. They’ve just got to put that pressure right out of their mind.” 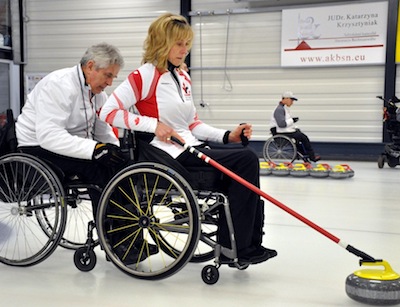 There will be some pressure as Canada (the team is rounded out by skip Jim Armstrong [Cambridge, Ont.], second Ina Forrest [Armstrong, B.C.], coach Joe Rea [Prince George, B.C.] and team leader Wendy Morgan [Burlington, Ont.]) attempts to reclaim the world championship it last won in 2011. Canada is traditionally a favourite going into any international curling competition. As well, with the 2013 world championship serving as the official test event for the wheelchair curling competition at the 2014 Paralympic Winter Games in 13 months, thoughts of those Paralympics will be hard to avoid. Gaudet, though, believes it’s a good opportunity for Canadian players and coaches to check out the Paralympic facility. The Canadian Paralympic team will be named later this year, with the five current members of Team Canada all strong candidates. “That’s certainly a good thing for us (to play in Sochi); we get to check out the venue and be prepared for next year, get all our ducks in a row and know what to expect,” said Gaudet. “Definitely, it’s a bonus.” Canada will open the Wheelchair Worlds on Feb. 16 against South Korea’s Hak-Sung Kim at 9:30 a.m. local time (12:30 a.m. EST). For the full schedule, refer to: wwhcc2013.curlingevents.com/schedule.