Team Canada off to perfect start at Wheelchair Worlds

Team Canada couldn’t have asked for a better way to open play on Saturday at the World Wheelchair Curling Championship in Sochi, Russia. 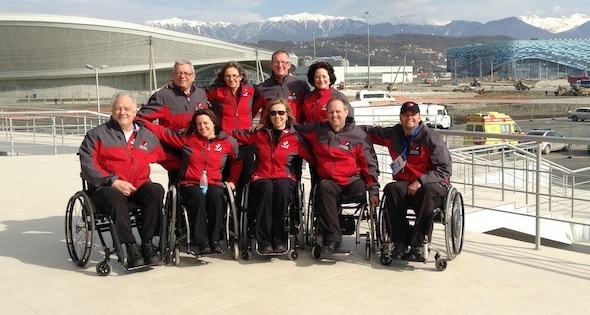 Team Canada, posing outside of the Olympic and Paralympic venues in Sochi earlier this week, opened the 2013 Wheelchair Worlds with a pair of victories on Saturday. (Photo, courtesy Mark Ideson)

The Canadians — skip Jim Armstrong (Cambridge, Ont.), third Dennis Thiessen (Sanford, Man.), second Ina Forrest (Armstrong, B.C.), lead Sonja Gaudet (Vernon, B.C.), alternate Mark Ideson (London, Ont.) and coach Joe Rea (Prince George, B.C.) — opened the world championship with a 7-1 win over South Korea’s Hak-Sung Kim. Canada broke open what had been a tight game with a steal of two in the seventh end and three more in the eighth. Later on, in a battle against a Scottish team skipped by Aileen Neilson (the lone female skip in the field) and coached by former Calgarian Tony Zummack, Canada was again in a stealing mood. Armstrong and Co. stole a single in the fifth end to go up 4-2 and then four more in the sixth to take control for good en route to an 8-3 triumph. “It’s a rainy day in Russia, but not for Team Canada,” said Canadian team manager Wendy Morgan. “We survived the meteor, and we persevered and showed great patience and experience. The ice was terrific and the players feel great.” Saturday’s results left Canada alone in first place with a 2-0 record, ahead of Norway’s Rune Lorentsen, Sweden’s Jalle Jungnell and Patrick McDonald of the U.S., who all won their only games of opening day. “We were actually a little slow out of the gate,” said Armstrong about the first half of their game against South Korea in the morning. “This has been a trial year, getting ready for next year, so we’ve not had too many opportunities to play together. We have a couple of new faces on the team this year and I think we will get stronger and used to each other. The facility here is great, they’ve done wonders with the ice.” Canada returns to action on Sunday with just one game on the docket, at 9:30 a.m. local time (12:30 a.m. EST) against the reigning world champion host team from Russia, skipped by Andrey Smirnov. Live scoring and standings from the 2013 World Wheelchair Curling Championship can be found at: wwhcc2013.curlingevents.com/.