Team Canada strengthened its hold on first place at the World Wheelchair Curling Championship with a victory over the defending champs on Sunday at the Ice Cube Curling Center in Sochi, Russia. 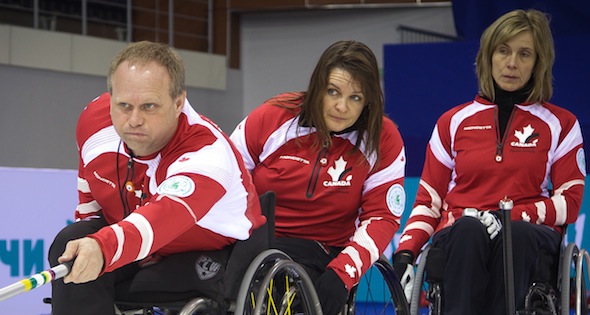 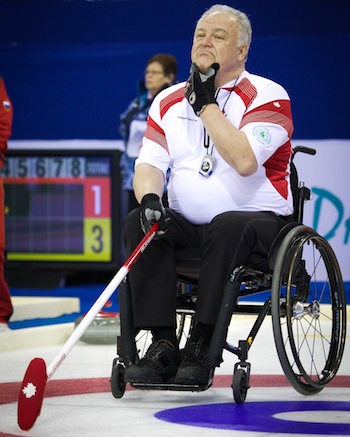 Canada found itself down 4-3 through five ends, but rallied to score three in the sixth end on an Armstrong draw to the four-foot, and then put the victory away with a deuce in the eighth and final end. “The Russians certainly did put us under a bit of pressure there,” said Armstrong, who’s looking to win his third world title in four years. “They played very well. We gave them opportunities and fortunately they didn’t convert them all. If we were going to stumble they were ready to pick it up and take it away.” Armstrong had high praise for the performance of the Russians. “It is absolutely amazing how far Russia has come in that short time,” he said. “I have got to speak well for their coaching and obviously the support within the country. They won last year and full marks for it and they are a force to be reckoned with.” The afternoon draw at the Wheelchair Worlds (Canada had the bye) was postponed due to ice conditions at the Ice Cube Curling Center, which will host the curling competitions at the 2014 Olympic and Paralympic Games. This is the first curling event to be staged at the venue. The World Curling Federation announced that the draw will be rescheduled for later in the week Canada is scheduled to play two games on Monday, at 9:30 a.m. Sochi time (12:30 a.m. EST) against China’s Haitao Wang and at 3:30 p.m. Sochi time (6:30 a.m. EST) against Slovakia’s Radoslav Duris. The Canada-China game can be watched online at russiasport.ru. Live scoring and standings from the 2013 World Wheelchair Curling Championship can be found at: wwhcc2013.curlingevents.com/.