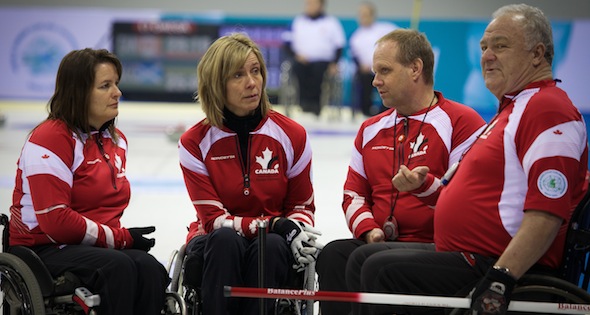 In the early draw against China’s Haitao Wang, the Canadians set the tone early by scoring three in the first end and three more in the fourth en route to a 9-5 victory. Canada then capped its perfect day with a 7-3 win over Slovakia’s Radoslav Duris. Again, Canada got off to a fast start with three in the first end, then took control for good in the middle ends with two in the fourth and single-point steals in the fifth and sixth ends. 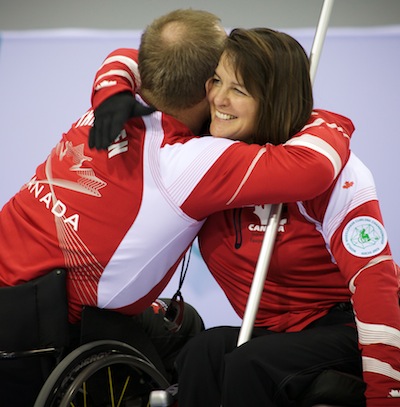 At 5-0, Canada is alone on top; Patrick McDonald of the U.S. is also unbeaten at 3-0, while Scotland’s Aileen Neilson, the lone female skip in the field, is at 3-2. While the Canadians are taking aim at a third world championship in four years, they’re also gaining valuable experience at the Ice Cube, which will be the venue for the 2014 Olympic and Paralympic curling competitions. “It’s a wonderful venue here,” said Gaudet, who’s hoping to curl for a third Paralympic gold medal in 2014. “Accessibility is great and the ice is wonderful. So we’re really looking forward to hopefully being back here next year.” While Canada is in solid position for a playoff spot (the top four teams will advance to the playoffs), Gaudet noted that the playing field is much more level than it used to be. “I think it (the game of wheelchair curling) has evolved incredibly fast,” she said. “There isn’t much of a gap any more, we’ve all take our game to another level. We’ve come out to play every team with the same amount of effort. We are all playing 100 per cent and it is great to see.” Team Canada faces a mid-week showdown for its only game on Tuesday when it takes on McDonald’s unbeaten U.S. team at 9:30 a.m. Sochi time (12:30 a.m. EST). Live scoring and standings from the 2013 World Wheelchair Curling Championship can be found at: wwhcc2013.curlingevents.com/.