Despite a 8-7 loss to Sweden on Tuesday, Team Canada retained first place at the World Wheelchair Curling Championship in Sochi, Russia. 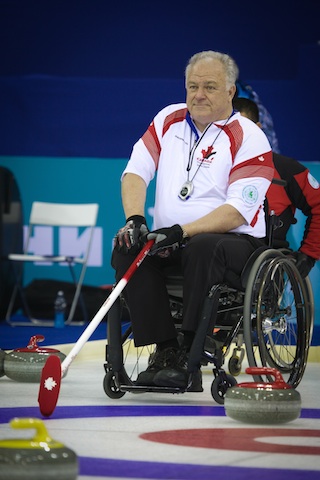 In their first loss of the competition, the Canadians — skip Jim Armstrong (Cambridge, Ont.), third Dennis Thiessen (Sanford, Man.), second Ina Forrest (Armstrong, B.C.), lead Sonja Gaudet (Vernon, B.C.), alternate Mark Ideson (London, Ont.) and coach Joe Rea (Prince George, B.C.) — were chasing Sweden most of the game and had a shot for the win, but Armstrong’s last rock wrecked on a guard. “Just a little bit more weight, more positive,” said Armstrong about what went wrong on his last shot. “There were a lot of rocks that came through there, and there wasn’t much room. I actually had an easier shot with my second than with my first, it was just that I was a little light…and that is all that it takes out there.” “We’ve played Jalle (Jungnell) a couple of times,” he said.  “We met in the final in 2009 and semis (of the Paralympics) in 2010. They are a good team and he’s a wonderful person, which makes it a lot more enjoyable when you are out their playing. Full marks to them today. The ice was a little tricky and they got on to it quicker than we did and we ended up chasing them. It’s a tough game when you are playing catch-up.” In Draw 10 action, Canada defeated Finland’s Markku Karjalainen 8-2. Team Canada alternate Mark Ideson replaced Sonja Gaudet at lead – an opportunity for the rookie to play in his first world championship. During free time on Tuesday, Team Canada was asked to meet some of the hundreds of volunteers helping at the Ice Cube Curling Center in Sochi. 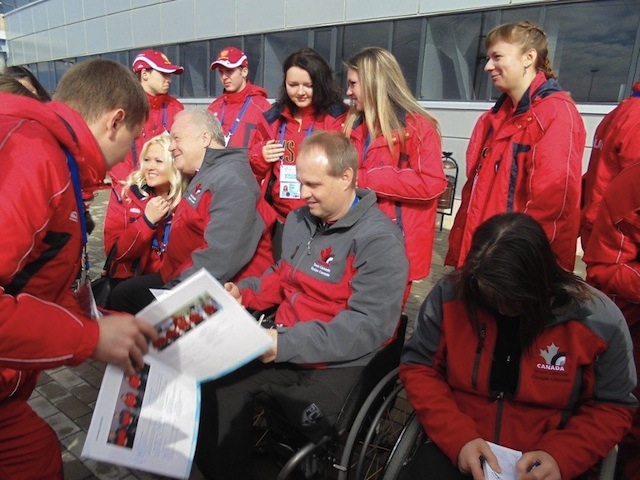 “It was such a warm reception for the team,” said Canadian Team Leader Wendy Morgan. “The volunteers here are so friendly and welcoming each day. We chatted with them outside the venue and it turned into an autograph session.  Our team singed programs, posters, accreditations an even an iPad cover!” Canada will play its final game of the round robin competition on Thursday at 2:30 p.m. Sochi Time (5:30 a.m. EST) against Norway’s Rune Lorenstsen. Live scoring and standings from the 2013 World Wheelchair Curling Championship can be found at: https://wwhcc2013.curlingevents.com/