A fond farewell for Colleen Jones as playoffs set

The playoff matchups are set after the last draw of 2013 Scotties Tournament of Hearts wrapped up on Friday night. Jennifer Jones of Manitoba will meet Rachel Homan of Ontario in the Page 1-2 playoff at 7 p.m. (EST) Saturday, and B.C.’s Kelly Scott, who finished in third place, will meet Heather Nedohin’s Team Canada on Saturday afternoon at 2 p.m. (EST) Friday night’s final draw between Homan and Nedohin at Kingston’s K-Rock Centre drew a strongly pro-Ontario crowd of over 4,000 fans cheering for the “home” team. The game came down to last shot, with Homan needing a piece of the button to earn the 6-5 win over last year’s Scotties champion. Also in action was undefeated Jennifer Jones, who wrapped up first place on Friday afternoon with a win over New Brunswick. Jones faced off with Jill Shumay of Saskatchewan, who needed the win to clinch at least a tie-breaker, but the Manitoba foursome proved too strong, and Shumay conceded an 8-4 loss after nine ends. “It’s been awesome,” said Shumay, who received an ovation from the appreciative crowd. “A learning experience, and just so fun.” “We had a great robin and went through undefeated, which is nice,” said Manitoba’s Jones. “It was a neat experience to do that, but now we’ve got to focus on the playoffs.” httpvh://www.youtube.com/watch?v=7Qk6edN3HfA B.C.’s Kelly Scott, who started the game assured of at least a tie-breaker, played a determined Quebec team led by skip Allison Ross. Already eliminated from playoff action, Ross did her best to generate offence against Scott, whose team was riding a four-game winning streak, but it wasn’t enough. B.C. curled at 91 percent as a unit and were just too strong, winning 9-5 in nine ends. Ross, a rookie skip with a young team competing at the national championship for the first time, said the Scotties experience was fantastic. “It was still a really great week,” said Ross. “It’s disappointing in a lot of ways, but we learned a lot this week, and I think we have a lot to build on for next year.” The other game of Draw 17 – Nova Scotia and Alberta – had no bearing on playoff positions, but it provided a significant moment: the last game for Colleen Jones in her 21st appearance at the Scotties. Going out in style, Nova Scotia finished off Alberta 6-2, and the K-Rock Centre fans offered up a huge farewell cheer that brought out the tears in Nova Scotia’s veteran three – Jones, third Kim Kelly and skip Mary-Anne Arsenault. “It was nice to finish with a win, and it was nice just to play in the Scotties again,” said Jones. “It’s been seven years since my last one and this was very special to come back in a different position, different role, and get another kick at the can.” 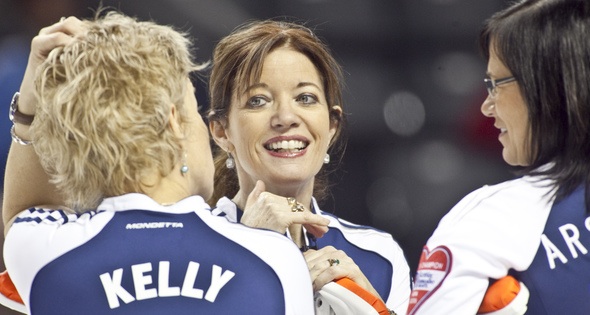 The Page 3-4 playoff game between B.C. and Team Canada takes place at 2 p.m. on Saturday, and the 1-2 game between Manitoba and Ontario takes place at 7 p.m. (all times EST). All draws are being broadcast by TSN/RDS, the official broadcast partner of the Season of Champions. Live scoring, statistics and updated standings are available at https://www.curling.ca/championships/scotties/draw-schedule/scores-and-standings/