Canada’s wheelchair curlers have struck gold in Russia. Team Canada captured its third gold medal in the past four world championships, beating Sweden’s Jalle Jungnell 4-3 on Saturday at the Ice Cube Curling Center in Sochi, Russia, in the final of the 2013 World Wheelchair Curling Championship. 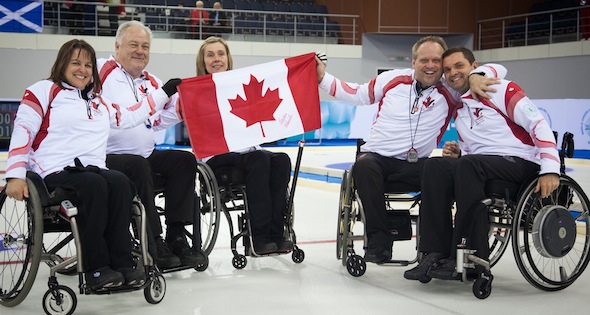 Tied 3-3 in the eighth and final end, Canadian skip Jim Armstrong made a wonderful freeze to a Swedish rock in the back of the four-foot with his first rock. Jungell couldn’t remove it, and Armstrong didn’t need to throw his last rock. “We did have our opportunities early in the game and we just never really closed on them,” said Armstrong. “The biggest thing in that final end was keeping that centre open so that I’d have a shot with my last one.” The result left gold medals around the necks of Armstrong, third Dennis Thiessen (Sanford, Man.), second Ina Forrest (Armstrong, B.C.), lead Sonja Gaudet (Vernon, B.C.), alternate Mark Ideson (London, Ont.) and coach Joe Rea (Prince George, B.C.). 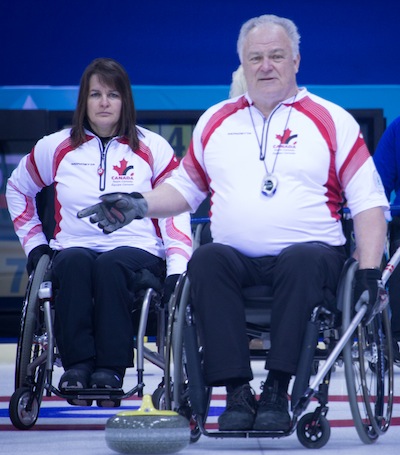 It was even more satisfying considering that Canada had lost to Sweden twice earlier in the week, 8-7 in the round robin on Wednesday, and 6-5 in the Page playoff one-two game on Friday. But Canada rallied to beat Patrick McDonald of the U.S. in Friday’s semifinal to set up a third showdown with Sweden. “It was a great game, probably one of the best-played wheelchair curling games ever,” said Armstrong. “It was very entertaining, obviously very close, very exciting, and really what our sport needs.” Armstrong, Forrest and Gaudet all won world titles in 2009 at Vancouver (when they beat Jungnell’s Swedes in the final) and 2011 in the Czech Republic (there was no world championship staged in 2010 due to it being a Paralympic year). Thiessen and Ideson were making their international debuts for Canada. The 2013 Wheelchair Worlds were the first curling event staged at the Ice Cube, which will play host to the 2014 Olympic and Paralympic curling competitions. “It speaks well of the facility,” said Armstrong. “I really think Sochi should be proud. It’s been a tremendous experience and I really look forward to having the opportunity to come back here next year.” Canada will name its wheelchair Paralympic team later this year. Earlier on Saturday, China’s Haitao Wang won the bronze medal with a 6-5 win over the U.S.