Team Canada’s Matt Dunstone won both games on the first day of competition at the World Junior Curling Championships in Sochi, Russia, defeating Switzerland and Russia. 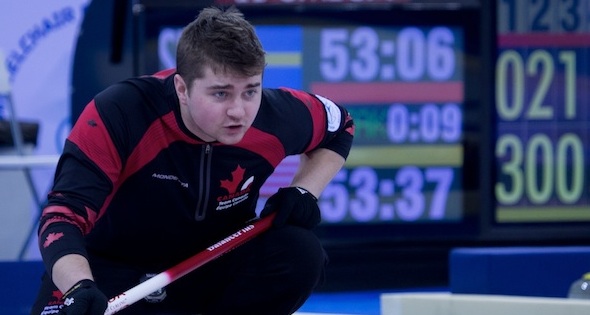 Against Switzerland, Canada started with hammer and kept the game close until the fourth end, scoring four for a 5-2 lead. Swiss skip André Neuenschwander was able to tie the game in the ninth, but Dunstone made a double take-out to score three and win 9-6. “I like to hit,” said Dunstone about his last shot, “so it was nice when I got that chance, but we’re hoping not even to be in that situation.” Dunstone’s Winnipeg team — third Colton Lott, second Daniel Grant, lead Brendan MacCuish, alternate Josh Barry and coach Scott Grant — topped the perfect day with a 5-4 win over the host Russian team skipped by Evgeny Arkhipov. “Two wins . . . in both games we’ve scored one more point than the other team and it doesn’t matter how you do it, as long as you get the ‘W’ — so far we’re doing that,” said Dunstone. “We’re not quite at the top of our game yet. We know we’ve got some stronger teams coming up now, we’ve got Scotland in our next game and we’re going to have to be on top of our game for that one.” In women’s competition, Corryn Brown’s team from Kamloops, B.C., struggled with the swingy ice, losing to Denmark 9-1 in a game that saw a series of stolen ends early by Danish skip Stephanie Risdal Nielsen. “It was a loss, but nothing that the girls haven’t experienced before,” said Canadian Team Leader Andrea Ronnebeck, who is with the team in Sochi. “The girls say they’ve learned a lot from the game today and are excited about playing tomorrow. It’s never a true loss when you take away the lesson.” The round robin continues on Friday at the Sochi Ice Cube Curling Center for Brown and her team of Erin Pincott, Samantha Fisher, Sydney Fraser, alternate Cathlia Ward and coach Ken Brown, who will meet reigning world champion Hannah Fleming of Scotland in the evening draw. The Canadian men have the day off and will return to the ice on Saturday morning against Scotland’s Kyle Smith. Curling fans can follow live coverage of the event on the event website and the World Curling Federation’s YouTube Channel found here: www.youtube.com/WorldCurlingTV The live coverage schedule is available along with news, live scores and galleries on the event website: wjcc2013.curlingevents.com For team line-ups visit: www.wjcc2013.curlingevents.com/teams