EDMONTON – After another shaky start, Kevin Martin’s Alberta rink rolled to a 10-3 win over British Columbia Sunday evening for their first win at the Tim Hortons Brier, presented by Monsanto. In other fifth-draw games, Jamie Koe of Northwest Territories/Yukon beat Eddie MacKenzie of P.E.I. 8-3, Glenn Howard of Ontario got past Jeff Stoughton of Manitoba 8-5 and Brad Gushue needed a last-rock miss in the 11th end by James Grattan to get past New Brunswick 7-6. 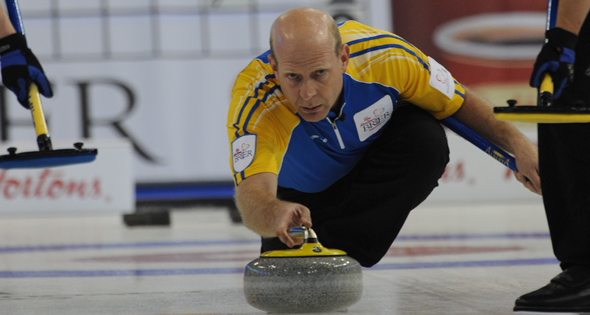 “That’s a nice one to win. Poorly played, but we caught a break,” admitted Gushue, now alone atop the standings at 4-0. “Probably a game we didn’t deserve to win but you need that if you’re going to win this.” Northern Ontario, Quebec and Ontario are now 3-0 behind Newfoundland-Labrador. Manitoba is 2-1, Northwest Territories/Yukon 2-2, Saskatchewan and Alberta 1-2, New Brunswick 1-3, B.C. and Nova Scotia 0-3 and P.E.I. 0-4. Alberta had lost its first two games when the home team struggled to make shots and it appeared the Albertans were headed for more trouble in Sunday evening’s fifth draw when Martin’s last-rock raise attempt jammed in the first end, leaving Andrew Bilesky a routine draw to the four foot for a 2-0 lead. httpvh://www.youtube.com/watch?v=D2dyQQsj7_A “That was a little unfortunate,” Martin said of his shot. “We had them in trouble. We controlled the end. I threw it good and it was an unlucky break so that was alright, those things happen. But boy we came back hard the rest of the ends.” Martin made a last-rock draw for two in the second and Alberta stole a single in the third when Bilesky was wide with a last-rock angle raise attempt. Alberta stole three in the third and another in the fourth. “We had a better handle on it and capitalized on a couple of mistakes by Andrew,” said Alberta third John Morris. “The first couple of ends it kind of felt like it did the first two games, we were just on the wrong side of the ends, miss the wrong shot at the wrong time. But the difference is we maintained pressure on the opponent end after end and eventually they cracked.” 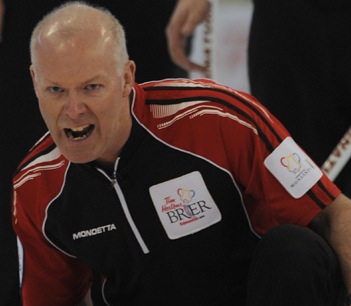 Howard, the defending champion, seemed to be sitting three in almost every end of his victory. “That just goes to show the guys were making shots,” said Howard, the defending champion. “I didn’t really have too many tough ones. I can’t say enough about the boys, they make the shots in front of me and make my job easy. But Stoughton’s shotmaking kept Ontario from capitalizing on their opportunities until the sixth end when Howard finally had a routine hit and stick for a pair and a 5-2 lead. “I really like the way we played that game, we were really solid,” said Howard. “I got Jeff on bit of an off-day, which is good. The whole game we never got ourselves into trouble.” Stoughton missed draws in the fifth and seventh ends that could have swung momentum his way and admitted it was “a little frustrating to miss so many last shots. We had three chances in a row to make double peels and didn’t make them… I just didn’t finish them off.” Gushue was also in tough against New Brunswick and trailed 4-2 after four ends. In the eighth, with New Brunswick up 5-3, Grattan was thin with his last-rock, hit-and-stick attempt, opening the door for Gushue to make a routine draw for two to tie the match. They traded singles in the ninth and 10th ends. Grattan had a fairly routine draw to the four-foot with his last rock in the extra end but was heavy, leaving Gushue to count the winning point. “The positive we can take from this is we kept a good attitude and stayed positive,” said Gushue. “The negative side is, boy, did we play bad. I played pretty good other than two complete brain farts in the fourth and fifth ends and we deserved to have it cost us the game.” In Draw 4, Quebec beat Northwest Territories/Yukon 6-3, Northern Ontario defeated P.E.I. 10-4, Newfoundland-Labrador beat Saskatchewan 7-2 and New Brunswick got past Nova Scotia 8-4. In the morning draw Northern Ontario rolled past B.C. 9-3, Quebec humbled Alberta 8-4, Manitoba beat Nova Scotia 9-4 and Ontario edged Saskatchewan 7-5. There are two draws Monday, at 1:30 and 6:30 p.m. MST (TSN-RDS). The 1:30 draw will have B.C. playing Saskatchewan, Nova Scotia taking on Ontario, Quebec meeting Manitoba and Alberta playing Northern Ontario. For updated scores and standings go to www.curling.ca.   [flickr-gallery mode=”tag” tags=”2013brierd5″ tag_mode=”all”]