Both junior men’s and women’s teams won games against their North American curling rivals in round-robin play at the 2013 World Junior Curling Championships today in Sochi, Russia. “It’s a pride thing,” said Canadian skip Matt Dunstone after defeating Korey Dropkin of the U.S. 7-3. “It was good to see Canada come out on top of these North American battles.” On the men’s side, the game started slowly for Canada, with USA stealing a point in the first end. But Winnipeg’s Dunstone and his team — third Colton Lott, second Daniel Grant, lead Brendan MacCuish, alternate Josh Barry and coach Scott Grant – responded with a deuce in the third and held a 5-2 lead at the fifth-end break. 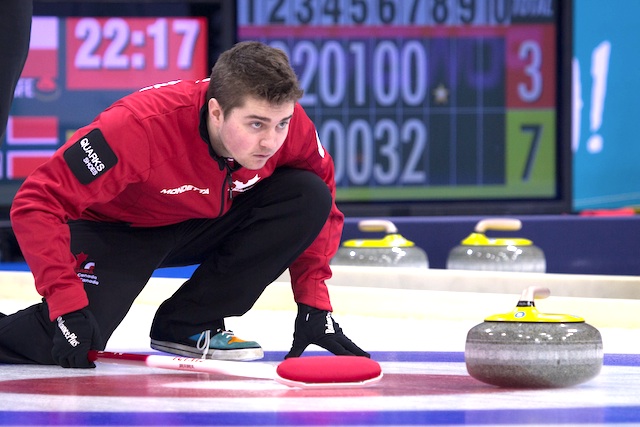 “We had a really strong fifth end and I think we made eight straight shots there,” Dunstone said. “After that we kind of took the momentum from them. We only had control after we got that deuce in nine. A two-point lead is nothing on the quality of teams here. I felt most comfortable once we got that four point lead in the last end.” Team Canada men now have a 5-2 record, tied for second place in the standings with Eirik Mjoen of Norway, Evgeny Arkhipov of Russia, and Patric Mabergs of Sweden, and well within reach of the leader, Kyle Smith of Scotland (5-1). On the women’s side, Corryn Brown and her team from Kamloops, B.C. — third Erin Pincott, Samantha Fisher, Sydney Fraser, with alternate Cathlia Ward and coach Ken Brown – came up just short against Switzerland’s Michelle Gribi (2-4). Trailing 4-2 in the 10th, Brown attempted a double to lie two and force the extra end, but just missed, taking only one for the 4-3 loss. But Brown and her team rebounded against the USA’s Miranda Solem in their second game on Tuesday, stealing two ends on the way to a 10-4 win. Canada took advantage of some misses by the Americans and kept the pressure on. Trailing 6-3 in the eighth, Solem had to draw against three and made the single to stay within two. But some miscues in the ninth left Canada lying three with one more rock to come, and Brown made no mistake, scoring four for a decisive victory over the North American rivals. “We definitely played a little more aggressive, put a little more rocks in play, and watched how things ended up,” said Brown, who now sits at 2-5 and will not make the playoffs. “We have nothing to lose, to be honest. So we might has well give it everything we’ve got. Although Canada will not see playoff action, other women’s teams continue to fight for position. Scotland’s Hannah Fleming remains the only unbeaten team (7-0) with Japan’s Sayaka Yoshimura (5-2), Russia’s Alina Kovaleva (4-3) and Denmark’s Stephanie Risdal Nielsen and (4-3) close behind. Team Canada women have the day off on Wednesday, and the men will play only once, against Norway at 10 a.m. (EST). Although Canada’s game isn’t scheduled for broadcast, fans can access video highlights and live coverage of other games from the round robin on the World Curling Federation’s YouTube Channel found here: www.youtube.com/WorldCurlingTV The live coverage schedule is available along with news, live scores and galleries on the event website: https://wjcc2013.curlingevents.com For team line-ups visit: https://www.wjcc2013.curlingevents.com/teams 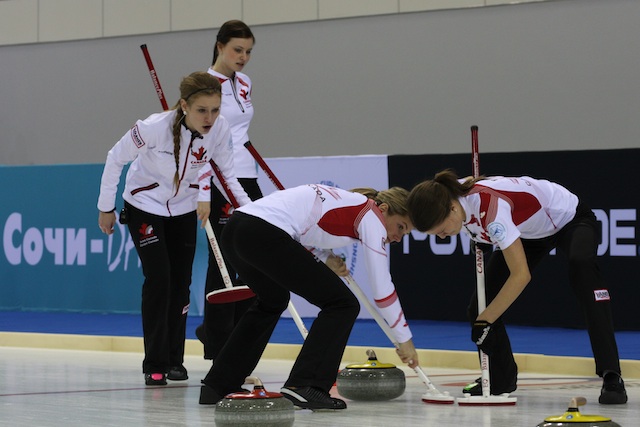