EDMONTON – Defending champion Glenn Howard of Ontario outdueled long-time rival Brad Gushue of Newfoundland-Labrador 6-5 Thursday to remain unbeaten at the Tim Hortons Brier, presented by Monsanto. In a highly entertaining match that saw both teams battle back and forth from the first rock to Howard’s final – a pressure-packed draw to the button – neither team was able to shake loose long enough to take any noticeable advantage. 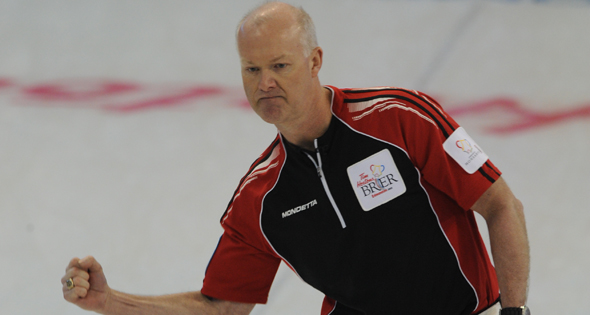 “A fantastic game,” said Howard, who is now 8-0. “I thought that was one hell of a game. I don’t care what anyone says, there were eight really great curlers out there. It was a fun game to play; we won by a couple of inches.” Gushue, who dropped to 7-2, made a near perfect draw to tie the score 5-5 with a single in a ninth end he said was “one of the better curling ends I’ve been part of in a long time. “Having to draw the side of the button against two, you expect when your team makes seven or eight shots not to have to do that. (Howard’s) last one, while it probably didn’t look as nice as my first one, it was a hell of a shot.” With his first stone Gushue made a sparkling double raise to kick out Ontario’s buried counter and leave himself sitting two. Howard followed with a perfect draw through a narrow port to tap back both Newfoundland-Labrador counters and force Gushue to make another near perfect shot to get his single. “It went back and forth,” Howard said of the end. “Brad had control and we kind of got it back. Brad kind of controlled it but fortunately I made a pretty good one with my last one. I don’t know if Brad had a shot at two but he made a great draw in there (for his single).” In the other matches in draw 13, Kevin Martin of Alberta kept his slim playoff hopes alive with a 7-2 over Eddie MacKenzie of Prince Edward Island, Jeff Stoughton of Manitoba scored two in the eighth end to nip James Grattan of New Brunswick 6-5 and Andrew Bilesky scored two in the 10th end to beat Jamie Koe of the Northwest Territories/Yukon 8-7 for British Columbia’s first win. The results left Ontario at 8-0, Manitoba at 7-1, Newfoundland-Labrador at 7-2, Quebec at 6-2, Northern Ontario 5-3, Alberta and Saskatchewan at 4-4, New Brunswick 4-5, Northwest Territories/Yukon 3-6, British Columbia 1-7, P.E.I., 1-8, and Nova Scotia 0-8. 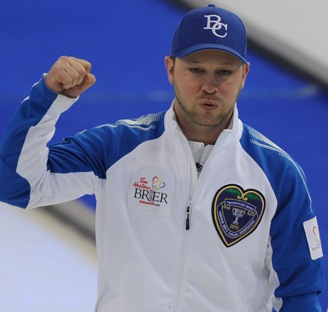 B.C. skip Andrew Bilesky also was in a fist-pumping mood after his team won its first game on Thursday afternoon. (Photo, CCA/Michael Burns)

Martin, a four-time Brier winner who said Wednesday his team was “dead”, stuck his head out of the grave with an impressive display of shot making. His Alberta crew scored two in the first end, stole a single in the fourth and got another pair in the sixth. “Maybe some of the feel is coming back, just in time,” second Marc Kennedy, who shot a perfect 100 per cent, said of the Alberta team that shot a combined 93 per cent in its critical win. “It’s still pretty farfetched to make the playoffs, but we won a couple of games, everyone’s demeanour is a little more positive, a little more fun out there. Just have to win out and hope everything else works. Everyone’s relaxed. Once we get a couple of wins under our belt everyone relaxes.” The 7:30 p.m. MST (TSN-RDS) draw will see B.C. take on Nova Scotia, and in three matches with huge playoff implications Manitoba will play Northern Ontario, Alberta will meet Saskatchewan and Quebec will tangle with Ontario. The round robin wraps up with three draws Friday, at 8:30 a.m., 1:30 and 6:30 p.m MST (TSN-RDS). For updated scores and standings go to www.curling.ca. [flickr-gallery mode=”tag” tags=”2013brierd13″ tag_mode=”all”]