It was their second meeting of the competition, and the second extra-end thriller between Canada and Scotland – and once again Scotland’s Kyle Smith came out on top. With the 8-6 loss in the Page 1-2 playoff on Friday, Matt Dunstone and his Winnipeg team – third Colton Lott, second Daniel Grant, lead Brendan MacCuish, alternate Josh Barry and coach Scott Grant – will have to play one more game to get to the final of the World Junior Curling Championships in Sochi, Russia. 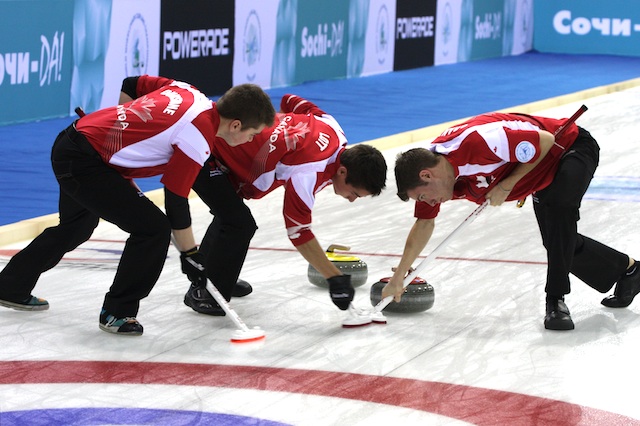 In another close game, both teams kept the pressure cranked up throughout. Dunstone showed his precision hitting ability in the sixth. Twice Smith drew the button behind cover, and twice Dunstone was able to remove the rock, scoring three points for a 4-2 lead. With the score tied 4-4 in the eighth, a pick on Dunstone’s last rock allowed Scotland to steal one, but Canada responded with a deuce in nine, and a 6-5 lead heading into the final end. A miss on Smith’s last-rock take-out pushed the game into extra ends.

On his last shot, Dunstone faced two Scottish counters and needed to draw the four foot, but his rock slid too far, giving Scotland the 8-6 victory and a ticket to the final. “We thought we had to make him make his shot,” said Dunstone. “We knew he was going to make his shot and I knew I was going to have to draw to the four foot and it just didn’t work out. The positive we can take out of this is we still have a shot at the gold. We’ve outplayed them both times we played against them. We’ve been all over them. We hope to play them in the big game.” Dunstone will meet Russia’s Evgeny Arkhipov in the semifinal on Saturday (10 a.m. EST). The winner goes through to the gold-medal final while the loser will play Sweden’s Patric Mabergs for the bronze medal. Both medal games take place on Sunday 9 a.m. local time (Saturday at midnight EST). “Russia’s been on a hot streak. They’ve won eight straight games now,” Dunstone said about the upcoming semifinal. “We know this will be no easier than our game against Scotland so we’ll have to come out firing tomorrow.” Fans can access video highlights and live coverage of games on the World Curling Federation’s YouTube Channel found here: www.youtube.com/WorldCurlingTV The live coverage schedule is available along with news, live scores and galleries on the event website: https://wjcc2013.curlingevents.com For team line-ups visit: https://www.wjcc2013.curlingevents.com/teams