EDMONTON – Brad Gushue made a last-rock hit-and-stick in the 10th end for a 5-4 win that put Newfoundland-Labrador in the playoffs of the Tim Hortons Brier, presented by Monsanto, and left the decision on the final two playoff berths up for grabs in Friday evening’s final draw. Gushue nipped Jean-Michel Ménard of Quebec to improve Newfoundland-Labrador to 8-3 and leave the team sitting, at least temporarily, second to the 10-0 record of Glenn Howard of Ontario. 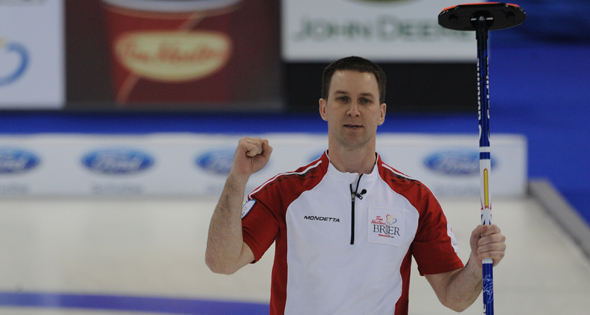 Newfoundland/Labrador skip Brad Gushue celebrates his win over Quebec to nail down a playoff spot at the Tim Hortons Brier. (Photo, CCA/Michael Burns)

In the other afternoon games Brad Jacobs of Northern Ontario beat James Grattan of New Brunswick 7-4, Jamie Koe of Northwest Territories/Yukon scored five in the ninth end to beat Brock Virtue of Saskatchewan 10-6 and Eddie MacKenzie of Prince Edward Island scored one in an extra end to nip Paul Flemming of Nova Scotia 5-4. Going into the final round-robin draw four teams remain in the hunt for the final two playoff berths – Northern Ontario and Jeff Stoughton of Manitoba at 7-3 along with Quebec and Kevin Martin of Alberta at 6-4. The 7:30 p.m. MST (TSN-RDS), has Quebec playing Saskatchewan, Alberta meeting Ontario, B.C., taking on Manitoba and Nova Scotia playing Northern Ontario. If Manitoba and Northern Ontario win their games, they are both in but there are numerous other scenarios that could determine the final placings and whether there are any tiebreakers. And should Newfoundland/Labrador, Manitoba and Northern Ontario all finish with 8-3 records, they will be ranked based on their pre-game draw to the button cumulative distances, which won’t be finalized until shortly after tonight’s games begin. All three teams finished 1-1 in head-to-head games, which is the first tiebreaker. 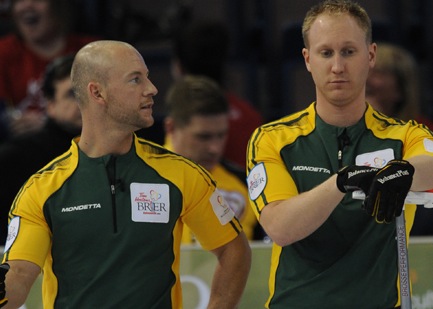 The one certainty is Howard will finish first and will play in the Page playoff one-two game Saturday at 1:30 p.m. MST. The three-four game will be played at 6:30 p.m. If there are tiebreakers they will be played at 8:30 a.m. The winner of the Page one-two game goes directly to Sunday’s 6:30 p.m. gold-medal game. The loser plays in Sunday’s 8:30 a.m. semifinal against the winner of the Page three-four game. The semifinal loser and the Page three-four loser will play for the bronze medal Sunday at 1:30 p.m. Gushue, the 2006 Olympic gold-medallist, had lost his last two games and needed a win to avoid being involved in the final-draw scenarios. He scored two in the third and two more in the eighth but almost gave the game away in the ninth when a pick on third Brett Gallant’s rock left Quebec controlling the house with the possibility of a huge end. Gushue eliminated that with an angle raise that got rid of three Quebec stones. “That pick in nine was almost a disaster,” admitted Gushue. “Fortunately (Quebec) left us an angle to get three of them out and when I made that I felt pretty darn good. Ultimately I just had a hack weighter (in the 10th) I had played three or four times that game so I felt very comfortable in that spot.” The win kept him in the hunt for second place. “Be nice to get that but it’s probably a bit of a long shot,” he said. “The game this morning was the one we needed to win to have a chance at that, or the game last night or the game before that.” Ménard’s foursome could have put itself in great shape to grab a playoff spot but now have to beat an inconsistent Saskatchewan team. “We’re hoping now,” said Ménard. “We need a couple of combinations tonight, along with a win to make it a tiebreaker. We controlled our destiny but unfortunately we not able to pull of the win. “As a team we played OK but Brad and company played an extraordinary game. We were able to stick with them but unfortunately they had the hammer last end and took advantage of it.” Jacobs summed up how the four teams still chasing playoff spots have to play their games tonight – with blinders on. “We can’t look around tonight at the other games. We know, obviously, if we go out and win we’re in so we need to stay on our sheet, kind of put a bubble over it and just focus, make our shots … put in another solid performance.” For updated scores and standings go to www.curling.ca. [flickr-gallery mode=”tag” tags=”2013brierd6″ tag_mode=”all”]