EDMONTON – Jeff Stoughton and his Manitoba foursome that needed a last-rock victory Friday just to get into the playoffs in the Tim Hortons Brier, presented by Monsanto, used another last-rock shot Saturday to defeat Glenn Howard 7-6 in the Page one-two game and earn a berth into Sunday’s final. In a stunning turn of events, Howard’s last rock, which he considered a straightforward double takeout for the win, rubbed his own guard and left Stoughton an open house to draw for three and the victory. 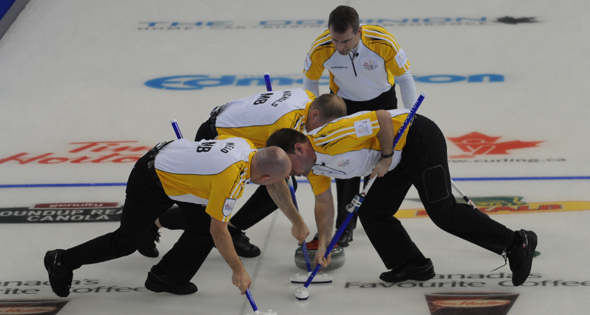 Jeff Stoughton urges on his teammates Jon Mead, Mark Nichols and Reid Carruthers as they try to drag his winning shot to the house in the 10th end. (Photo, CCA/Michael Burns)

“Honestly I threw a pretty good shot, made sure I protected wide, lots of room, thing just went crazy, jumped and we couldn’t hold it,” Howard said of the shot. “Paper-ticked the yellow. It’s not a good feeling, we thought we had that game.” The defending Brier champion, who went 10-1 to finish first in the round robin, said he had no doubt it was the right shot, although he had other options to take out one Manitoba stone, give up the deuce and go to an extra end with the hammer. httpvh://www.youtube.com/watch?v=ezNmOoMxz7k “I don’t regret the call, it was there, it was makeable,” he said. “I had a shot to win the game that wasn’t that tough. The yellow stone shouldn’t have been in play. Again I’m not sure … why it curled six inches. Bottom line is I missed.” Stoughton almost came up short with his last-rock draw into a wide open house and needed some strong sweeping by his front end of second Reid Carruthers and lead Mark Nichols to get into scoring position. “I thought I might have pulled the string on that last one. Thank the guys for sweeping that thing to the eight-foot for me on that last one,” said Stoughton, who said he was surprised with Howard’s shot selection and he probably would taken the runback option rather than try the double. “We put some great shots in in that last end. We were thinking lets get our deuce and go to an extra end.” 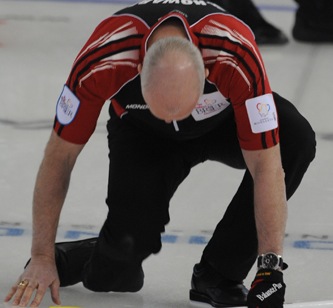 Howard counted a pair in the second when Stoughton’s attempted double ended up getting out one Ontario stone but leaving the second one behind cover in the eight-foot. That created the opportunity for Howard to hit and stick with his final rock for two. Stoughton, with his team of third Jon Mead, Carruthers, Nichols, alternate Garth Smith and coach Rob Meakin, was forced to take a single in the third when his first stone rubbed a guard out front and he was left with nothing to do with his final rock but draw for one. But he pulled even with a steal in the fourth when the two skips filled the four-foot with six stones, three each. Stoughton was counting and Howard’s try at bumping his stone to just dislodge Manitoba’s counter a couple of inches to get shot rock failed when he was too thin. The fifth again saw a crowded house when they got to skip rocks. Stoughton tried to clean house with his first rock but left Ontario counting one in the four-foot and his shooter out in the eight-foot. After Howard drew the button, Stoughton tried an angle raise from the other side but again got only one Ontario stone. Howard drew the button for his pair and a 4-2 lead. Stoughton pulled even again in the sixth, thanks to great sweeping by Carruthers and Nichols to carry his final stone past a long guard on a successful hit-and-stick for two. Howard, and his team of third Wayne Middaugh, second Brent Laing, lead Craig Savill, alternate Scott Howard and coach Scott Taylor, scored singles in the eighth and ninth ends to carry a 6-5 lead into the final end. In the Page three-four game this evening (6:30 p.m. MT, TSN-RDS), Brad Jacobs of Northern Ontario plays Brad Gushue of Newfoundland-Labrador with the winner playing Howard in the semifinal Sunday at 8:30 a.m. The semifinal winner will play Manitoba in the gold-medal game Sunday at 6:30 p.m. (MT, TSN-RDS). The Page three-four loser plays for the bronze medal 1:30 p.m. Sunday. That game will be available on www.TSN.ca. For live scoring and statistics, go to www.curling.ca. [flickr-gallery mode=”tag” tags=”2013brierd18″ tag_mode=”all”]