EDMONTON – Brad Jacobs and his Sault Ste. Marie team defeated Jeff Stoughton of Manitoba 11-4 Sunday to win the Tim Hortons Brier, presented by Monsanto. It is Northern Ontario’s first Brier championship since Al Hackner of Thunder Bay won the second of his titles back in 1985. 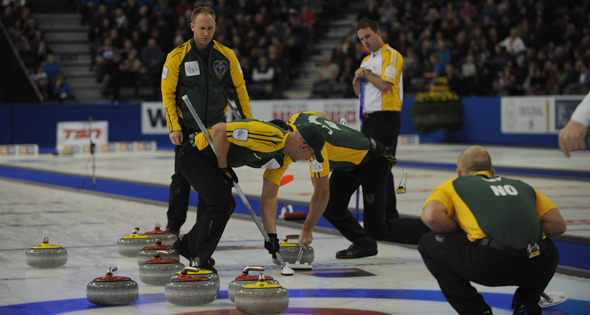 “I was born in ’85, it’s time” for another win, the 27-year-old Jacobs said after he beat four-time champion Glenn Howard of Ontario 9-7 in the Sunday morning semifinal The win is the first for 27-year-old Jacobs and his team of third Ryan Fry, second E.J. Harnden, lead Ryan Harnden, alternate Matt Dumontelle and coach Tom Coulterman. It is the fourth Brier win for Northern Ontario. Besides Hackner, Bill Tetley won in 1975 and Tom Ramsay won the area’s first in 1950. Jacobs finished the round robin 8-3, tied for second, but needed a pressure-packed, last-rock hit and stick to count three in the 10th end of his final round-robin game to beat Paul Flemming of Nova Scotia 5-2 and get into the playoffs. He then scored a last-rock single in the 11th end for a 6-5 win over Brad Gushue of Newfoundland-Labrador in the Page three-four playoff game. His third straight win over Howard put him into the final for the first time. They will now represent Canada at the Ford World Men’s Curling Championship, presented by Booster Juice in Victoria March 30 to April 7. Howard won last year’s world title. In addition to wearing the Maple Leaf in Victoria, Jacobs will be in contention to play at the 2014 World Financial Group Continental Cup in Las Vegas (the Canadian teams will be determined following the 2013 Tim Hortons Roar of the Rings Canadian Curling Trials in Winnipeg in December) and becomes one of the teams eligible for either the Capital One Road to the Roar Pre-Trials in Kitchener, Ont., or the Trials in Winnipeg, which will determine Canada’s representatives for the 2014 Olympic Winter Games in Sochi, Russia. Kevin Martin of Alberta, Howard and Stoughton have already qualified for the Trials. Teams that make the playoffs will earn a share of $130,000 in cresting television exposure value: $40,000 each to Jacobs and Stoughton, $30,000 to Howard for winning the bronze-medal game and $20,000 to Gushue, who finished fourth. As well, the Jacobs team will earn $144,000 in Sport Canada funding over a two-year period as well as $40,000 from Own The Podium for training and competition expenses and an additional $10,000 for wearing a Tim Hortons sponsorship crest at the Ford World Men’s Championship. Next year’s Tim Hortons Brier will be in Kamloops, B.C.