Some of Canada’s top curlers will open play on Thursday at the Leduc Recreation Centre in Leduc, Alta., in the first Canadian Mixed Doubles Trials national championship. The winning team in the four-day competition will earn the right to represent Canada at the World Mixed Doubles Championship, April 13 to 20 at the Grant-Harvey Centre in Fredericton, N.B. 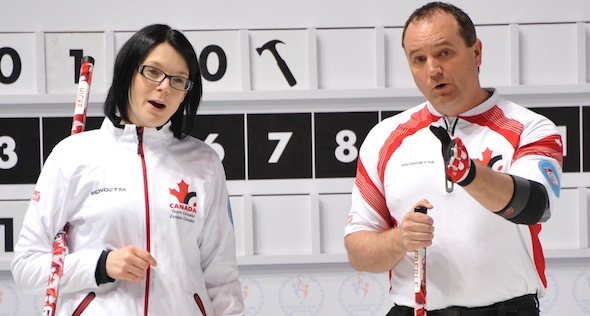 Former Tim Hortons Brier champion Mark Dacey of Halifax is entered with wife Heather Smith-Dacey; that duo, which won the Nova Scotia mixed doubles title, was scheduled to represent Canada at the 2010 World Mixed Doubles Championship in Chelyabinsk, Russia, but travel issues caused by the Iceland volcano eruption prevented them from competing. As well, Winnipeg’s Sean Grassie, who was part of the only Canadian duo to ever reach the podium at the World Mixed Doubles Championship (he won bronze with Allison Nimik in 2009 at Cortina d’Ampezzo, Italy), is entered with Tracey Ann Lavery. And all four members of the 2012 Canadian Mixed Championship team from Regina — Jason Ackerman, Chantelle Eberle, Dean Hicke and Colleen Ackerman — are in the field. Eberle and Hicke teamed up for a sixth-place finish at last year’s World Mixed Doubles in Erzurum, Turkey. It’s the first time the Canadian Curling Association has staged a mixed doubles national championship; Canadian teams for previous world mixed doubles championships were drawn from the winning team at the traditional four-player Canadian mixed curling championship.

The traditional mixed Canadian championship will continue (the 2013-14 Canadian mixed is Nov. 14-23, 2013, at the Rideau Curling Club in Ottawa). But with the World Curling Federation, with support from the CCA, making a concerted push to have mixed doubles curling included in the Winter Olympics as soon as the 2018 Games in Pyeongchang, South Korea, the decision was made to institute a true national championship in the discipline, which was first unveiled at the 2002 Continental Cup in Regina. “This is a big step forward for the mixed doubles discipline in Canada,” said Canadian Curling Association Chief Executive Officer Greg Stremlaw. “We’re excited about the potential for mixed doubles curling on the Olympic stage and our first Canadian Trials will be a wonderful showcase for a unique and entertaining style of curling.” The competition format will consist of 32 teams (each team consists of one male curler and one female curler) divided into four pools of eight, with the top two from each pool after the round robin plus the four teams with the next-best records advancing to a 12-team single elimination playoff. The gold-medal game is scheduled for Sunday at 4 p.m. MDT. Twelve Member Association champions are in the field, with 20 more teams coming from a call for entries with priority given to players based on their standing on the Order of Merit, which is based on the CCA’s Canadian Team Ranking System. The World Mixed Doubles Championship began in 2008 in Vierumäki, Finland. It has since been captured four times in five years by Switzerland. In 2008, it was won by Switzerland’s Irene Schori and Toni Müller, who successfully defended their title the following year in Cortina d’Ampezzo. Russia’s Yana Nekrosova and Petr Dron won the 2010 event in Chelyabinsk, while Switzerland’s Alina Pätz and Sven Michel took the 2011 renewal in St. Paul, Minn. The 2012 edition in Turkey was again won by Switzerland, this time represented by Nadine Lehmann and Martin Rios. Canada’s Susan O’Connor and Dean Ross finished fifth in 2008, while in 2011, Canada’s Rebecca Jean MacDonald and Robert Campbell finished 12th. The mixed doubles game format is played over eight ends (instead of the usual 10 at CCA events). Each team has only six stones and one of those stones from each team is pre-positioned on the centre line before every end of play. One player delivers the first and last stones of the end while the other player throws the second, third and fourth stones.  If they choose to, the two players may swap positions from one end to the next. Both team members are also allowed to sweep. For more information on the 2013 Canadian Mixed Doubles Trials, including the team list and draw times, go to www.curling.ca/2013mixeddoubles/ For more information on the 2013 World Mixed Doubles Championship, go to: www.wmdcc2013.curlingevents.com.