Four teams are straight through to the quarter-finals and another eight will open the playoff round tonight at the inaugural Canadian Mixed Doubles Trials national curling championship. The four pool winners — Scott McDonald and Jaclyn Rivington of Ontario (7-0) from Pool A, Dean Hicke and Chantelle Eberle of Saskatchewan (7-0) from Pool B, Sean Grassie Karen Klein of Manitoba (6-1) from Pool C and Mike Armstrong and Ashley Quick of Saskatchewan (5-2) in Pool D— all earned first-round playoff byes. 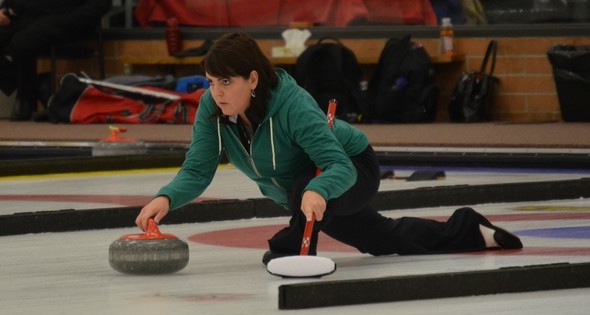 Meanwhile, the playoffs will open tonight at 8:30 p.m. (all times Mountain) tonight at the Leduc Recreation Centre with four first-round matchups — Dustin Kalthoff and Nancy Martin of Saskatchewan (6-1) against Kelsey Boettcher and Kelly Lauber of Manitoba (4-3); the upstart junior-aged Yukon pairing of Mitch Young and Chelsea Duncan (6-1) takes on  veterans Mark Dacey and Heather Smith-Dacey of Nova Scotia (4-3); Jason Ackerman and Colleen Ackerman of Saskatchewan (5-2) play Robert Smallwood and Jody Smallwood of the Yukon; and Chris Schille and Erin Carmody of Alberta (4-3) are up against Robert Desjardins and Isabelle Neron of Quebec (4-3); and Jason A Kalthoff and Martin clinched their spot out of Pool A in the seventh and final round-robin draw on Saturday. They stole single points in the second, third and fourth ends, along with a deuce in the fifth, and cruised home with a 9-4 victory over the B.C. pair of Norm Richard and Debbie Girard (0-7). McDonald and Rivington, meanwhile, were finishing off their unbeaten run through the pool with a 9-6 victory over Saskatchewan’s Matt Lang and Jessica Hanson (3-4), scoring five in the fourth end, followed by steals of one in the fifth and two more in the sixth to take control. In the other Pool A games, Dacey and Smith-Dacey opened the game with four in the first end and never looked back in a 10-2 victory over Quebec’s Michel Briand and Genevieve Frappier (2-5); and New Brunswick’s Avery Hughson and Shelby Wilson (3-4) finished their trip to the Trials off with a 7-2 win over B.C.’s Ernie Daniels and Sarah Daniels (3-4). In the other seventh-round games: Pool B — Hicke and Eberle, who represented Canada at the 2012 World Mixed Doubles Championship in Turkey, finished round-robin play unscathed, scoring two in the seventh and stealing three in the eighth for a 9-5 win over the Manitoba/Saskatchewan team of Jenna Loder and Josh Heidt (4-3); Young and Duncan, meanwhile, won their sixth straight game, stealing one in the sixth end and deuces in the seventh and eighth ends for a 9-4 win over Saskatchewan’s Cole Tenetuik and Alison Ingram (3-4); Derek Owens and Danielle Sicinski (2-5) of Saskatchewan stole points in the eighth and ninth ends to snuff out the playoff hopes of Newfoundland/Labrador’s Jamie Danbrook and Erin Porter (3-4); and Alberta’s Jason Larence and Melanie Puzzie (2-5) closed out with a 12-1 win over Ian Moir and Marta Moir of the Northwest Territories (1-6). Pool C — Grassie and Klein clinched their pool title, winning a first-place showdown against the Ackermans; both teams entered the game with 5-1 records, but Grassie and Klein took control early with three in the second end, and the teams hook hands after Grassie and Klein scored four in the sixth end. In the other games, Manitoba’s Kelsey Boettcher and Kelly Lauber (4-3) stole two in the fourth end and one more in the fifth for a 7-5 win over B.C.’s Tyler Tardi and Dezaray Hawes (4-3) and advanced to the playoffs based on tiebreakers (head to head and last-shot draw distances); Matt Blandford and Darah Provencal of Alberta scored three in the seventh end and then one in the extra for a 7-6 win over Kyle Leach and Cori Dunbar of Alberta (1-6); and Lyle Walker and Kristen Walker (1-6) stole one in the extra end for a 5-4 win over Dale Parker and Janice Parker (3-4) in an all-Alberta match. Pool D — The Smallwoods wrapped up their playoff spot with a 9-5 win over Armstrong and Quick, stealing one in the second end, three in the third and one more in the fourth. Armstrong and Quick, though, finished first based on their round-robin win over Alberta’s Chris Schille and Erin Carmody, who also finished at 5-2. Schille and Carmody advanced to the final 12 with a 10-9 extra-end win over Desjardins and Neron, the same team they’ll meet again tonight to open the playoffs. In the other Pool D games, Steve Chenier and Courtney Chenier of Northern Ontario (2-5) beat Newfoundland/Labrador’s Stephen Shepherd and Donna Davis (4-3) 9-3; and Alberta’s Deryk Kuny and Erica Ortt (2-5) were 9-1 winners over Saskatchewan’s Bob Ziegler and Barb Cressman (2-5) The quarter-final round is set for Sunday at 10 a.m., with the semifinals at 1 p.m. and the gold-medal game at 4 p.m. The winning team in the four-day competition will earn the right to represent Canada at the World Mixed Doubles Championship, April 13 to 20 at the Grant-Harvey Centre in Fredericton, N.B. For more information on the 2013 Canadian Mixed Doubles Trials, including the team list, standings and draw times, go to www.curling.ca/2013mixeddoubles/. For more information on the 2013 World Mixed Doubles Championship, go to: www.wmdcc2013.curlingevents.com/