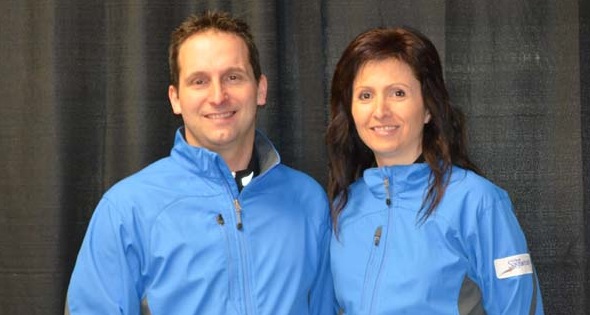 With the victory, the Chicoutimi residents will represent Canada at the 2013 World Mixed Doubles Championship April 13 to 20 in at the Grant-Harvey Centre in Fredericton, N.B. It will be the first chance for both curlers to curl in a world championship. Desjardins is the more experienced of the two, having competed in two Tim Hortons Briers — in 2011 at London, Ont., playing third for François Gagné, and then skipping his own team in 2012 at Saskatoon. He lost in the provincial semifinal this season. Desjardins and Neron shaded Nova Scotia’s Mark Dacey and Heather Smith-Dacey 7-6 in one semifinal, while Kalthoff and Martin advanced to the gold-medal game with a 7-4 win over Saskatchewan’s Dean Hicke and Chantelle Eberle. Hicke/Eberle and Dacey/Smith-Dacey went home with bronze medals. Canada has been previously represented at the World Mixed Doubles by two members of the winning team at the Canadian Mixed Curling Championship. In 2008 at Vierumäki, Finland, Canada (Susan O’Connor and Dean Ross) finished fifth while in 2009, Canada earned a bronze medal — the only podium finish by a Canadian team — with a third-place finish by Sean Grassie and Allison Nimik. In 2010 at Chelyabinsk, Russia, Canada did not compete because the Icelandic volcanic ash caused the temporary cancellation of air travel which prevented Dacey and Smith-Dacey from arriving in time for the competition. Canada’s Rebecca Jean MacDonald and Robert Campbell finished 12th in 2011 in St. Paul, Minn., while last season, Eberle and Hicke were sixth in Erzurum, Turkey. For more information on the 2013 World Mixed Doubles Championship, go to: www.wmdcc2013.curlingevents.com/.