Give credit to Robert Smallwood and Jody Smallwood — they do things with style. The Yukon mixed doubles champions advanced to the quarter-finals of the inaugural Canadian Mixed Doubles Trials on Saturday night at the Leduc Recreation Centre with a stunning 10-5 victory over 2012 Canadian mixed team championship teammates Jason Ackerman and Colleen Ackerman of Saskatchewan. 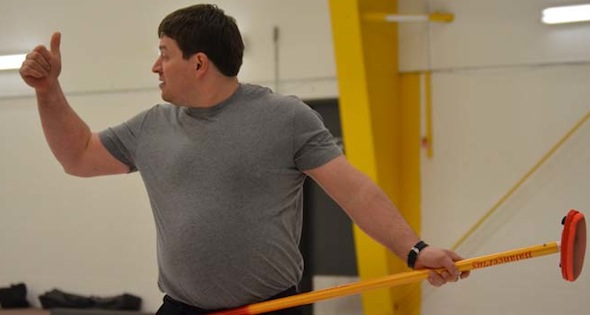 Robert Smallwood of the Yukon and partner Jody Smallwood have reason to be happy after their playoff win on Saturday night in Leduc, Alta. (Photo, Alexander A. Patton / CAPTAINmedia)

The Smallwoods scored a perfect six-ender in the seventh end for the victory — teams only deliver five rocks per end, and each team has one stone in set positions at the beginning of the end. With the victory, the Smallwoods advance to take on the Ackermans’ teammates on that national mixed championship team last season, Dean Hicke and Chantelle Eberle of Saskatchewan, who represented Canada at the 2012 World Mixed Doubles Championship in Turkey. The quarter-finals are scheduled for Sunday at 10 a.m. (all times Mountain). In other playoff action on Saturday, two other former national mixed champions, Mark Dacey and Heather Smith-Dacey of Nova Scotia, advanced to the final eight. Dacey and Smith-Dacey, whose trip to the 2010 World Mixed Doubles Championship in Russia was short-circuited by the Icelandic volcano eruption, advanced with a 9-3 win over the other Yukon hopeful, the junior-aged pair of Mitch Young and Chelsea Duncan. Dacey and Smith-Dacey broke the game open with four in the fifth end and added steals of two in the sixth and two more in the seventh. Dacey and Smith-Dacey will meet former World Mixed Doubles bronze-medallist Sean Grassie of Manitoba along with teammate Karen Klein in the quarters. Saskatchewan’s Dustin Kalthoff and Nancy Martin moved into the final eight with a 9-6 win over Manitoba’s Kelsey Boettcher and Kelly Lauber. Kalthoff and Martin rallied after surrendering four in the first end; they tied the game with four in the second, then stole deuces in the third and fourth ends and never looked back. Kalthoff and Martin will play Saskatchewan’s Mike Armstrong and Ashley Quick on Sunday morning. In the other first-round game, Quebec’s Robert Desjardins and Isabelle Neron  put fours on the board in the first and third ends and cruised to an 11-3 win over Alberta’s Chris Schille and Erin Carmody. With the win, Desjardins and Neron advanced to play Ontario’s Scott McDonald and Jaclyn Rivington in the quarter-finals. The semifinals are scheduled for 1 p.m., followed by the gold-medal game at 4 p.m. The winning team in the four-day, 32-team competition will earn the right to represent Canada at the World Mixed Doubles Championship, April 13 to 20 at the Grant-Harvey Centre in Fredericton, N.B. For more information on the 2013 Canadian Mixed Doubles Trials, including the team list, standings and draw times, go to www.curling.ca/2013mixeddoubles/. For more information on the 2013 World Mixed Doubles Championship, go to: www.wmdcc2013.curlingevents.com/