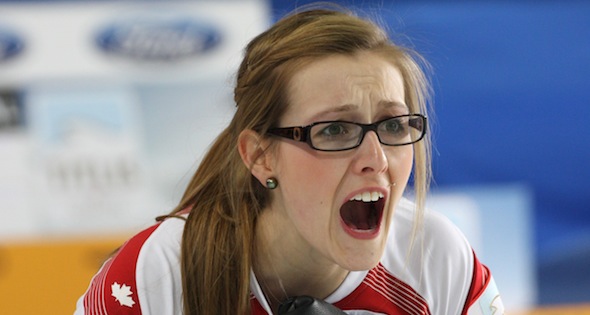 Homan made an open draw to the eight-foot for the victory, looking at two Italian counters in the back 12-foot. The Canadian team was able to overcome some inconsistent draw weight, along with a leaky roof that created a small puddle on their sheet — icemakers worked between ends to reduce the damage — to bounce back from a disappointing extra-end loss to the United States on Monday night. “We’re struggling with  the ice a little bit,” admitted Homan after the game. “But every game that we play we end up a little bit better.” After surrendering a first-end deuce (Homan wrecked on a guard, creating the opportunity for the Italians), Canada bounced back in the second, an end set up by a wonderful come-around draw by Weagle on lead rocks. Italy was chasing the rest of the end, and in the end, Homan had the open draw for two. Italy took one in the third before Canada put a game-breaking three on the board in the fourth thanks to back-to-back lovely inturn draws around a centre guard by Miskew and Homan. Gaspari’s last-rock freeze attempt bounced into the open, giving Homan an open hit for three. Italy came back with one in the fifth, and Canada blanked the next two ends before Homan was forced to make a clutch draw for one while looking at two Italian counters in the four-foot. Italy tied it with two in the ninth; Gaspari was able to draw the four-foot after Homan’s last-rock draw wrecked on a guard. The loss dropped the Italians’ record to 2-5. Sweden’s Margaretha Sigfridsson suffered her first loss on Tuesday, bowing 6-4 to China’s Bingyu Wang. The Swedes and Scotland’s Eve Muirhead share the lead at 5-1, while Russia’s Anna Sidorova (5-2) is alone in third place. Team Canada returns to action on Tuesday to take on the Swedes at 12:30 p.m. (all times EDT). “It was good to get that win under our belt, and we’ve got a  tough game against Sweden tonight,” said Homan. “So we’re going to have to prepare for that one and hopefully we’ll come out on top.” All of Team Canada’s games are being broadcast by TSN/RDS, the official broadcast partner of the Season of Champions.