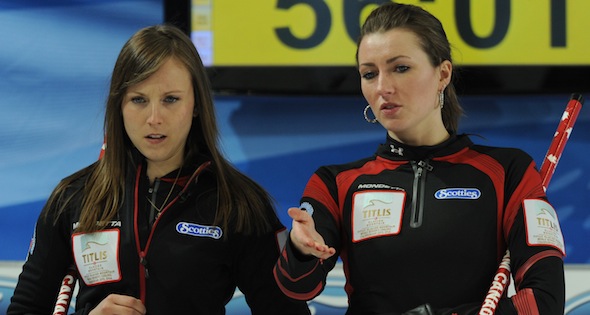 With the win, Canada improved to 6-3, tied for third place with Russia’s Anna Sidorova, but the Canadians hold the tiebreaker advantage based on their head-to-head victory earlier in the round robin. “I think for both teams it was a really good battle out there,” said Homan. “Both teams knew we had to win that for the standings as well. We battled hard and the team really played well and made the shots when we needed them so it was a great effort by my team as well.” Canada will close out its round-robin schedule on Thursday with games against a pair of 4-5 teams, China’s Bingyu Wang (2:30 a.m., all times EDT) and Japan’s Satsuki Fujisawa (7:30 a.m.). “I don’t think we’ve played Japan before. We played China a while ago so I’m not too sure about them. We’ll just stick to our game plan so it doesn’t really matter who we are playing – we really want to make play-offs so we need at least one win tomorrow.” The top four  teams will make the Page playoff round, which sees the first- and second-place teams playing for a berth in the gold-medal game on Sunday (8 a.m.). The third- and fourth-place teams will also meet, with the winner moving onto the semifinal on Saturday (1 p.m.). The loser of the three-four game will play the semifinal loser in the bronze-medal game on Sunday (3 a.m.). The playoffs begin on Friday. After an 8-5 win over Germany’s Andrea Schöpp in the morning draw, the Canadians came out and thoroughly outplayed the Swiss team, which headed into the game tied with Canada in the standings at 5-3. Homan, who was scored at a stellar 94 per cent, made a wonderful runback takeout to open the scoring with a single in the second, and then proceeded to put pressure on the Swiss for the next eight ends. Tirinzoni needed to make shots against multiple Canadian counters to score singles in the third (looking at two), fifth (looking at three) and seventh ends (looking at five) to hang in the game. Homan, meanwhile, took another single in the fourth end, and then made a tricky angle tap of her own rock to score a pair in the sixth end, and then added a crushing three in the eighth and never looked back. The two-win day was the perfect tonic, said Homan, for bouncing back from a tough loss to Sweden’s Margaretha Sigfridsson on Tuesday. “It wasn’t disappointment yesterday, we still learned,” she said. “It was a tough loss (against Sweden) but we learned a lot from it and we played so well. I think we’re just building from here on out and playing really well right now and need to keep going tomorrow and we’ll make the playoffs.” Sweden and Scotland’s Eve Muirhead continue to share the lead in the 12-team round-robin standings, and both are assure playoff berths with 8-1 records (the Swedes beat Scotland in round-robin play to hold the tiebreaker advantage). All of Team Canada’s games are being broadcast by TSN/RDS, the official broadcast partner of the Season of Champions. Event news, live scores and galleries can be found on the event website: www.wwcc2013.curlingevents.com