There are only two unbeaten teams, both female, with one round-robin draw to go at the 2013 CIS-CCA Curling Championships in Kamloops, B.C. 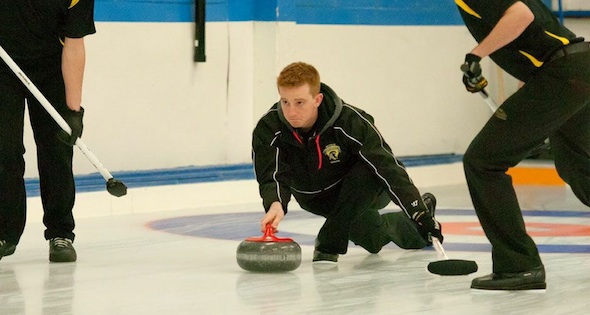 The University of Alberta Pandas, skipped by Kelsey Rocque, and the University of Manitoba Bisons, skipped by Breanne Meakin, are unbeaten after six draws. Both won twice on Friday and will go head to head in a winner-take-all battle for first place in the final round-robin draw of the championships Saturday morning at 9 a.m. (all times Pacific). The winner advances directly to Sunday’s gold-medal game while the loser will play in the semifinal. 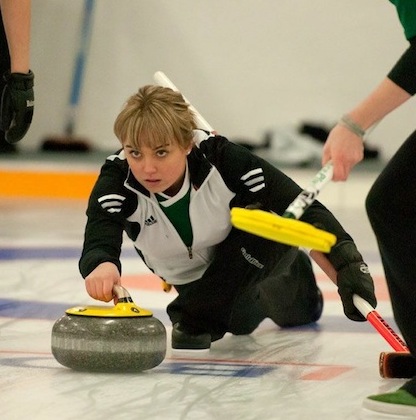 Alberta took on the University of Guelph Gryphons (Jaimee Gardner) in the opening draw of the day and beat the Gryphons 9-8 before eking out an 8-7 decision over the Western University Mustangs (Caitlin Romain). Meakin and her Bison foursome kicked off Day 3 with an 8-2 victory over the UPEI Panthers (Veronica Smith). Their afternoon game was a 10-2 drubbing of the host Thompson Rivers University WolfPack  (Tiffany Krausher). The ’Pack has fallen to 2-4 in the tournament after losing its morning matchup with Saint Mary’s University Huskies (Sara Spafford) 6-4. The Huskies, meanwhile, had a great day winning both of their games. They needed 11 ends to dispose of UPEI   8-7 in the afternoon draw, and have taken over third place with a 4-2 record. The McMaster University Marauders ( Coyle) are 3-3 and sitting in fourth, needing a win in their last-round-robin game and a Saint Mary’s loss to force a tiebreaker. The Marauders opened the day with a 9-3 victory over winless Western 9-3 but lost to Guelph 9-6. Guelph is tied with TRU for fifth at 2-4. On the men’s side, a battle of the top two teams in the afternoon draw saw the Alberta Golden Bears take on the University of Waterloo Warriors. The Golden Bears and skip Brendan Bottcher entered the game unbeaten in five starts. Waterloo and skip Jake Walker had suffered their first defeat earlier in the day. The battle of former Canadian junior men’s champions saw Walker shade Bottcher 6-5. That left both teams tied for top spot at 5-1, with Waterloo, which dropped a surprising 6-5 decision to the previously winless Trent University Excalibur (Mike Bryson) in the morning draw, holding the tiebreaker advantage thanks to Friday afternoon’s win. Both teams are assured of playoff berths The final round-robin games on Saturday morning have Walker taking on Darren Nelson and his Thompson Rivers University WolfPack (3-3) while Bottcher will do battle with the Manitoba Bisons and skip Steen Sigurdson (3-3). Sigurdson and Nelson went 11 ends in the afternoon draw on Friday before Manitoba prevailed 5-4. That left Manitoba, Thompson Rivers and the Dalhousie Tigers (Lee Buott) tied for the third and final playoff position at 3-3. Dalhousie kept its playoff hopes alive with a 7-6 win over Atlantic Canada rivals the Acadia Axemen (Robert Mayhew). Earlier in the day, Dalhousie fell 7-6 to Thompson Rivers. Acadia and Trent are tied for sixth place at 2.4. The Carleton University Ravens, skipped by Brent Lyon-Hatcher have a 1-5 record. They opened the day with a 9-5 loss to Alberta and were beaten 10-5 by Trent University. After Saturday morning’s last round-robin draw, potential tiebreakers will be played at 2 p.m., followed by the semifinals at 7 p.m. Sunday’s championship final is set for 2 p.m. Results, schedule and team information are available at www.curling.ca/championships/university/