After a heart-breaking loss to Scotland’s Eve Muirhead on Saturday, Rachel Homan returned to the ice on Sunday to win a medal for Canada. 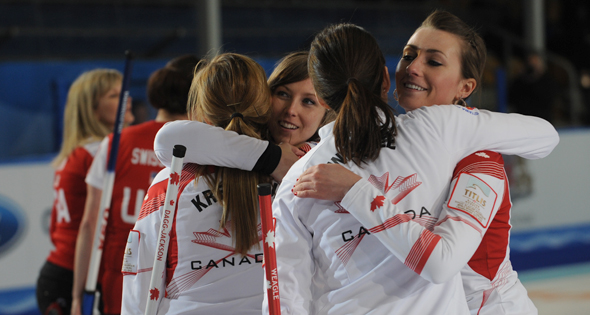 Homan and her Ottawa team – Emma Miskew, Alison Kreviazuk and Lisa Weagle, with alternate Stephanie LeDrew and coach Earl Morris – earned their spot on the podium by defeating Erika Brown of the U.S.A. 8-6 at the Titlis Glacier Mountain World Women’s Curling Championship 2013, presented by Ford Motor Company of Canada. “I’m really proud of my team for going out there and re-grouping after last night , going out there today and playing real strong,” said Homan.  “It’s our first time at the worlds, it’s been amazing  and we’ve learned a lot and  gained a lot of experience.  It’s all good for our trials coming up.  We’re just going to take the experiences from this week.” 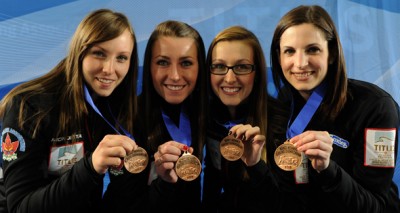 The Canadians took a single to start in the game. The U.S. followed by scoring two, and after that, it was all Canada. Homan tied the game 3-3 in the third with a three-point end, and then forced Brown to chase for the rest of game. Canada kept the pressure on, just as they had in their Page 3-4 game a day earlier, never relinquishing the lead. Brown tried to get some offence going, but with Homan curling at 94 per cent – 100 per cent on draws – there was nowhere to hide. In the tenth kept it fairly open, Homan was able to hit out for the 8-6 win. “It doesn’t matter who we play, we’re just playing our game – playing the rocks and not the team,” Homan said. “It was a good battle by both teams.  I’m just really proud of my team for playing so well today.” “It sucks to lose,” she said about the disappointing loss to Scotland in the semifinal. “But for us to come back and win like we did, I’m really proud of that.” Scotland’s Muirhead will play Sweden’s Margaretha Sigfridsson in the gold-medal match-up at 8 a.m. Sunday on TSN/RDS, the official broadcast partner of the Season of Champions. Event news, live scores and galleries can be found on the event website: https://wwcc2013.curlingevents.com