The 10th Canadian Wheelchair Curling Championships are underway at the RA Centre in Ottawa, with 10 teams competing for the national title. 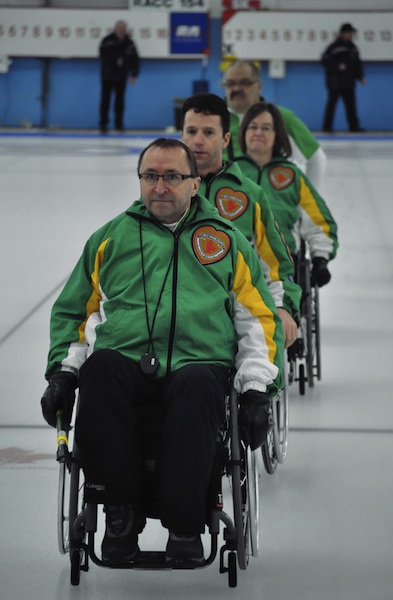 Last year’s winner, Saskatchewan’s Darwin Bender and his team of Gil Dash, Marie Wright and Larry Schrader from the Callie Curling Club in Regina, held off British Columbia’s Gary Cormack, who scored a five-ender in the seventh. Bender put the game away in the eighth with a deuce for a 10-6 win. Last year’s finalist, Alberta’s Bruno Yizek, put the pressure on Newfoundland and Labrador’s Joanne MacDonald, scoring six points in the third end. But it wasn’t enough to hold off MacDonald and her team from the RE/MAX Centre in St. John’s, who stole points in the fifth and eighth ends for the 8-7 victory. It took Team Ontario a couple of ends to get going, but a five-ender and a steal of two in the sixth put Ken Gregory and his team from the Bradford Curling Club ahead 11-1 over New Brunswick’s Michael Fitzgerald. Although Fitzgerald was able to take a single in the seventh, he shook after seven ends with the score 11-2. In other action, Benoît Lessard, of the Magog Curling Club, stole five points on the way to a 7-3 victory over Nova Scotia’s Trendal Hubley-Bolivar. Manitoba’s Chris Sobkowicz gave up four stolen points to Northern Ontario’s Gino Sonego in the fifth and sixth ends, finishing up on the wrong side of a 6-4 score. Draw 2 action continues at the RA Centre in Ottawa Monday afternoon at 3 p.m. EDT. Teams at the Canadian Wheelchair Curling Championship will compete in a round robin from March 25-29, leading to the Page playoffs on Saturday, March 30. The semifinal will be played at 10 a.m. EDT and the final at 3 p.m. EDT on Sunday, March 31. Draw results and other event information will be available at www.curling.ca and https://www.curling.ca/championships/wheelchair.