Three teams remain undefeated and three are still looking for a win after the second draw of the Canadian Wheelchair Curling Championship at the RA Centre in Ottawa. In a close game between Manitoba and Quebec, Chris Sobkowicz of the Assiniboine Memorial Curling Club in Winnipeg scored a single in the eighth to tie it up at 5-5. In the extra end, Quebec’s Benoît Lessard was able to hide a rock behind cover for the 6-5 win. 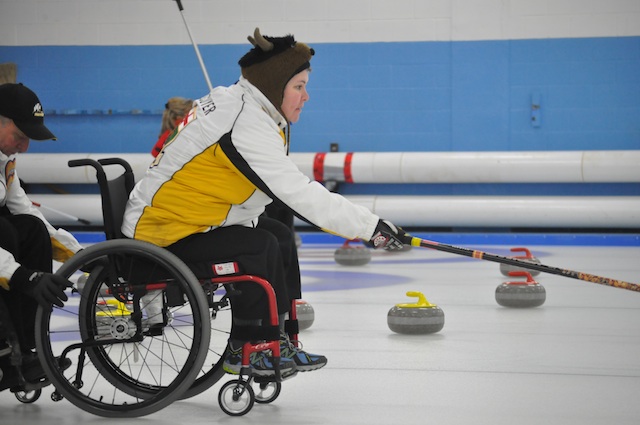 Newfoundland and Labrador started strongly in the afternoon game, scoring three in the first end and keeping the pressure on. Joanne MacDonald and her team from the RE/MAX Centre in St. John’s stole two more points in an 8-4 win over Ontario’s Ken Gregory. Northern Ontario’s Gino Sonega of the Fort William Curling Club in Thunder Bay scored five in the second end on the way to a 10-4 win over Trendal Hubley-Bolivar and his team from the Lakeshore Curling Club in Lower Sackville, N.S. In other action, Alberta and Saskatchewan squared off in a rematch of last year’s championship final. Saskatchewan’s Darwin Bender started strong, but a steal of four in the eighth end enabled Bruno Yizek and his team from the Calgary Curling Club to win 9 – 6. New Brunswick and British Columbia traded deuces early, but steals in the next three ends helped B.C’s Gary Cormack to a 9-5 win over Michael Fitzgerald and his team from the Thistle-St. Andrew’s Curling Club in Saint John. Draw 3 will get underway at the RA Centre in Ottawa on Tuesday morning at 10 a.m. EDT. Teams at the Canadian Wheelchair Curling Championship will compete in a round robin from March 25-29, leading to the Page playoffs on Saturday, March 30. The semifinal will be played at 10 a.m. EDT and the final at 3 p.m. EDT on Sunday, March 31. Draw results and other event information will be available at www.curling.ca and https://www.curling.ca/championships/wheelchair.