New Brunswick edged Nova Scotia in an extra end to score its first win, while Northern Ontario and Quebec remain undefeated after three draws at the 10th Canadian Wheelchair Curling Championship taking place at the RA Centre in Ottawa. 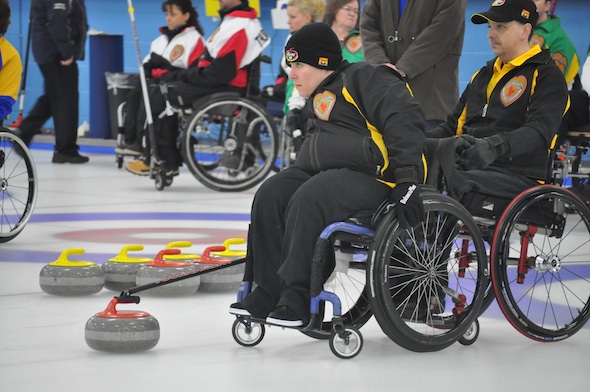 Northern Ontario’s Gino Sonego and his team from the Fort William Curling Club in Thunder Bay kept the pressure on Saskatchewan’s Darwin Bender to score a 7-2 win over last year’s champions and remain undefeated at the top of the standings. Also undefeated, Quebec’s Benoît Lessard stole four straight ends from Alberta’s Bruno Yizek on his way to a 6-2 victory, Quebec’s third win of the round robin. Both New Brunswick and Nova Scotia came into the third draw looking for their first win. Michael Fitzgerald and his team from the Thistle-St. Andrew’s Curling Club in Saint John, N.B., stole the first three ends, but Nova Scotia’s Trendal Hubley-Bolivar stormed back with a four-ender. Tied 6-5 after seven, Nova Scotia stole one to tie, but couldn’t keep it going in the extra, losing 7-6. In other action, British Columbia’s Gary Cormack, a two-time Canadian champion, blanked Joanne MacDonald of Newfoundland and Labrador, scoring three points in the first end with hammer, then stealing the next five ends for a 9-0 victory. Manitoba’s Chris Sobkowicz stole three big ends from Ontario’s Ken Gregory to take an 8-1 lead after five, and went on to win 8-4. Draw 4 will get underway at the RA Centre in Ottawa on Tuesday afternoon at 3 p.m. EDT. Teams at the Canadian Wheelchair Curling Championship will compete in a round robin from March 25-29, leading to the Page playoffs on Saturday, March 30. The semifinal will be played at 10 a.m. EDT and the final at 3 p.m. EDT on Sunday, March 31. Draw results and other event information will be available at www.curling.ca and https://www.curling.ca/championships/wheelchair