Quebec, British Columbia, Alberta and Northern Ontario finish in the top four positions and are headed for the playoffs after the final round-robin draw at the Canadian Wheelchair Curling Championship in Ottawa. 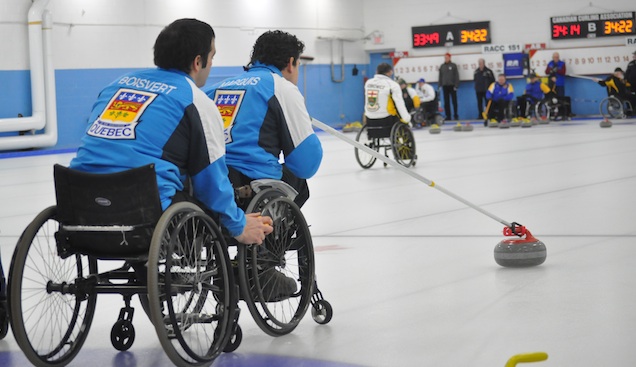 Newfoundland and Labrador’s Joanne MacDonald had a chance to move into tie-breaker position with a win over Manitoba, but just couldn’t get the points on the board, losing to Chris Sobkowicz and his team from the Assiniboine Memorial Curling Club in Winnipeg by a score of 10-4. Quebec’s Benoît Lessard started the game against Ontario’s Ken Gregory by giving up a steal of one, but had control of the game from that point on. Lessard took the next three ends to lead 7-1 at the break, and his team from the Magog Curling Club never looked back, stealing three more points for the 10-1 victory. British Columbia came into Draw 9 with a playoff spot sewn up, but Northern Ontario’s Gino Sonego needed some help from Manitoba to stay in contention. Even though Sonego and his Thunder Bay team lost 10-2 to B.C.’s Gary Cormack, Northern Ontario finishes in fourth place and squeaks into the playoffs with a 5-4 record. After a disappointing loss on Friday evening, Alberta stormed back against New Brunswick to claim third place in the standings with a 6-3 record. Bruno Yizek and his team from the Calgary Curling Club scored multiple points with hammer and held New Brunswick’s Michael Fitzgerald to singles for the 10-3 win. In the one game with no bearing on playoff positions, a four-ender by Saskatchewan’s Darwin Bender was not enough to catch Nova Scotia’s Trendal Hubley-Bolivar. Nova Scotia stole nine points in a 12-4 win over last year’s champions, leaving both teams with 3-6 records. Playoff action at the RA Centre in Ottawa gets underway on Saturday with the Page 1-2 game between Quebec and B.C. at 10 a.m. and the Page 3-4 game between Alberta and Northern Ontario at 3 p.m. EDT. The semifinal will be played at 10 a.m. EDT and the final at 3 p.m. EDT on Sunday, March 31. Draw results and other event information will be available at www.curling.ca and https://www.curling.ca/championships/wheelchair Live-streaming of games is available at: www.ustream.tv/channel/wcblog2.