Following the first-ever Wheelchair Curling Long-term Athlete Development (LTAD) Summit earlier this winter, athletes and coaches around the country have been trying out new best practices in order to further the sport in Canada. 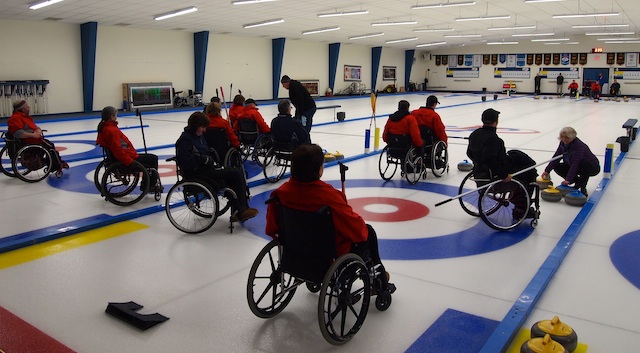 In January 2013 at Jasper Place Curling Club in Edmonton, wheelchair curlers from Calgary and Edmonton play for the opportunity to represent Alberta at the 2013 Canadian Wheelchair Curling Championship. This year’s Team Alberta is skipped by Bruno Yizek from Calgary.(Photo Lisa Shamchuk)

At the Jasper Place Curling Club in Edmonton, wheelchair curling coach Cathy Craig was inspired to implement delivery modifications after meeting wheelchair curler Sonja Gaudet and coach Karen Watson at the Summit. One of the modifications introduced by Gaudet and Watson is a handle or post attached to the wheelchair, which allows wheelchair curlers to throw from a more upright position and maintain their balance. The other modification is an extension to the delivery stick, which results in a handgrip similar to the one used by able-bodied curlers. “The national team program has done more for grassroots curling development than anyone,” says Craig. “Through their experimentation, they’ve discovered the most effective delivery technique. We are using this technique to teach all newcomers to the sport. If this technique doesn’t work for their body type, then we’ll offer other options.” Individual modifications are critical. Craig notes some wheelchair athletes can manage without a handle or post, yet others would fall out of their chairs without it. Similarly, the modification to an athlete’s delivery stick depends on his or her hand dexterity. “As able-bodied coaches, it’s critical that when we coach wheelchair curling we understand the challenges that come with being in a wheelchair,” Craig says. “We can’t ask people to do things when they feel out of their comfort zone. If newcomers don’t feel comfortable with the sport initially, they won’t come back.” Craig and her group of wheelchair curlers worked with a millwright to design a clamp and a post, but this modification never materialized. The solution was found when a new employee at the curling club, who also happened to be a drummer, suggested using a drum clamp – which fits wheelchairs perfectly – along with a custom-bent piece of steel conduit designed to fit each curler’s body type. To modify regular delivery sticks, a piece of PVC or copper elbow pipe was attached to the end to give a pistol style grip. 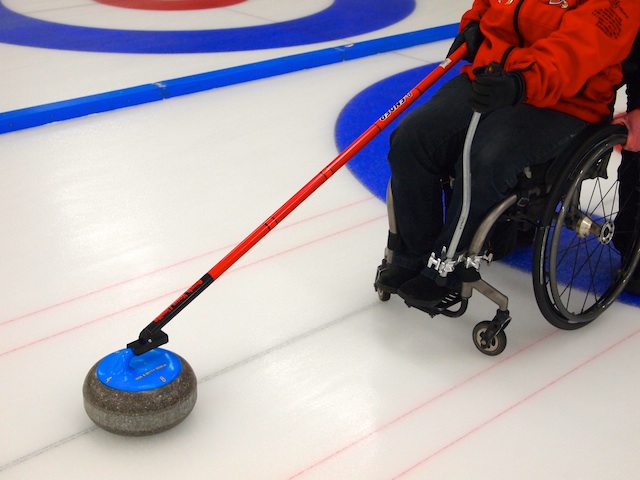 Wheelchair curler Shawna Walsh demonstrates the handle and grip modifications discussed at the LTAD Summit that have since been incorporated at the Jasper Place Curling Club in Edmonton, Alta. (Photo Lisa Shamchuk)

Craig believes experienced wheelchair curlers at her club who have made these modifications have seen gains in shot percentage due to their improved ability to maintain line and deliver consistent weight. “The biggest gains have been with new people who we’ve introduced to the sport using these techniques,” Craig says. “They have gotten to a level of competency more quickly than curlers who started before the changes.” Wheelchair curler Shawna Walsh agrees. “Looking at the new curlers compared to when I started [six years ago], they’ve caught on quicker,” says Walsh. “It’s like after one season they’re at the same level I was at after three seasons. Before, there were so many different ways of delivering the rocks that it was very confusing as a new curler.” Craig compares it to the backswing technique that was traditionally popular with able-bodied curlers. “The backswing was really hard for new curlers to catch on to,” she says. “Now that we’ve gone to a non-backswing delivery, at least everyone can make a shot. Maybe they’re not great shots, but at least they’re making shots. This is exactly what the new wheelchair curling delivery modifications have accomplished. Wheelchair curlers aren’t getting as discouraged and they’re not leaving the sport.” Craig has been coaching wheelchair curling for three years, adding to her 27 years of coaching experience and her 17 years as a curling club manager. She recognizes the chief challenge facing wheelchair curling in Canada. “Right now, most wheelchair curling is geared towards the competitive level and those recreational curlers who don’t have the skill level are being left behind and leaving the sport,” she says. “We have to embrace recreational wheelchair curlers in our club leagues – we need to make sure club level of play is valued.” Craig also looks forward to continuing the dialogue started at the Long-Term Athlete Development Summit. “It’s important for wheelchair coaches to work with high performance athletes and coaches,” she says. “These conversations can be taken back to our clubs to help both competitive and recreational curlers around the country.” Read more about the first Wheelchair Curling Long-term Athlete Development (LTAD) Summit, which took place November 2012 in Ottawa, Ont. 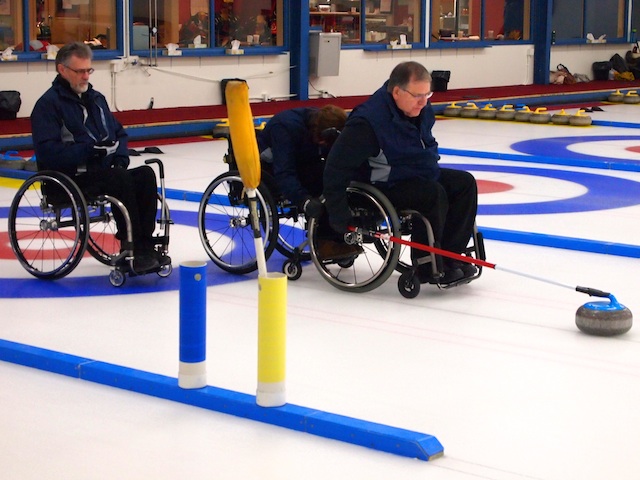 Skip Bruno Yizek and his team from Calgary, Alberta will represent Alberta for the eighth time at the 2013 Canadian Wheelchair Curling Championship. (Photo Lisa Shamchuk)