Scotland’s David Murdoch can start making plans for the playoffs at the 2013 Ford World Men’s Curling Championship, presented by Booster Juice. The two-time world champion was a 7-4 winner over China’s Rui Liu on Thursday morning at the Save-On-Foods Memorial Centre in Victoria, B.C., moving the 8-2 Scots into sole possession of first place in the 12-team round-robin standings, a win clear of Canada’s Brad Jacobs (7-2), who had a bye on Thursday morning. 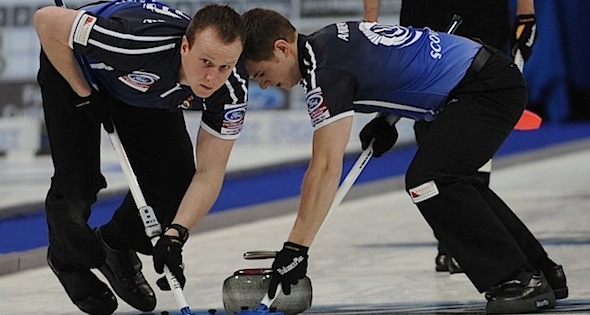 Not only did the win clinch a spot in the final four, combined with Denmark’s Rasmus Stjerne losing 7-6 to Sweden’s Niklas Edin it ensured that Scotland will play in the Page playoff one-two game (either Friday or Saturday depending on potential tiebreakers), with a berth in Sunday’s gold-medal game on the line. “That  feels great,” said Murdoch. “We set our target at the start of the week and we kept it running throughout the week, and showed great form. What we need to do now is take that form into the Page weekend and that’s our next objective.” Scotland never trailed against China, which dropped to 5-5 and needing some help to reach the four-team Page playoffs. “That was a solid game, nice and steady,” said Murdoch. “We played with a nice calmness today; we didn’t need to get over-excited about anything — just play our game and make our shots.” Canada returns to action this afternoon (2 p.m., all times Pacific) against Denmark, and a Canadian victory would set up a Canada-Scotland Page one-two game. Sweden gave its playoff hopes a shot in the arm with the crucial win over Denmark. A steal of two in the seventh end proved crucial in the Swedish victory, which left both teams with 6-4 records, tied for third place with Jiří Snitíl of the Czech Republic. “I think we started the game as we wanted in the first couple of ends. then we got in big trouble in the fourth or fifth end,” said Edin. “They actually could have got a five-ender out of us so I had to make a good freeze with my last one after my flash take-out. We were in trouble and we weren’t playing good in those couple of ends. But then after that, we came out stronger and they started making some small mistakes. We started putting the rocks in the right places and got some lucky breaks to  get back into the game.” In other Draw 15 play, the Czechs picked up a crucial victory, scoring a go-ahead deuce in the eighth end for a 7-5 win over Japan’s Yusuke Morozumi. Japan bowed out of the playoff race with a 3-7 record with one game to play. It marked a record win total for the Czechs, who’d never finished above five victories at a world men’s championship. “It is satisfying,” said Snitíl, whose previous best finish at the World Men’s Championship was an eighth-place ranking in 2011 at Regina. “We’ve been working hard, practising almost every day after work. You’re done at work, you feel done, but you still have to practise. Sometimes you say, ‘Oh, I’m not going to go tonight.’ But the other boys say, ‘Oh, c’mon, let’s go.’ We’re happy that we’re still in it. We had a couple ends this morning when we were facing four or three and made the shots to get out of it, so I’m happy that we always found a way to escape.” In the other morning game, U.S. skip Brady Clark was heavy with his last-rock draw to the four-foot to force an extra end, allowing Russia’s Andrey Drozdov to escape with a 7-5 win. The Russians improved to 3-7 while the U.S. dropped to 4-6 and needing a miracle to make the playoffs. Besides Canada, Norway’s Thomas Ulsrud (5-4), Switzerland’s Sven Michel (4-5) and Finland’s Aku Kauste (1-8) had byes in Draw 15. Play at the Ford Worlds resumes on Thursday with draws scheduled for 2 p.m. and 7 p.m. The top four teams at the end of the round robin will advance to the Page playoffs, which see the first- and second-place teams playing for a berth in Sunday’s gold-medal game (4 p.m.). The loser of the one-two game drops to the semifinal (Saturday, 4 p.m.) against the winner of the Page three-four game. The semifinal loser and Page three-four loser will play for the bronze medal Sunday at 11 a.m. For more event information, including rosters and the official draw, and to purchase tickets, go to: www.curling.ca/championships/worlds/. Live scoring and standings are available at: www.curling.ca/scoreboard/?e=12. TSN/RDS, the official broadcast partner of the Canadian Curling Association, will provide live coverage of Canada’s round-robin games, in addition to all playoff games. In French, all of the games will be shown live on RDS2.