The Ford World Curling Championship has been an incredible event! And of course an event like this can only happen with a lot of people dedicating a lot of time to make it great. 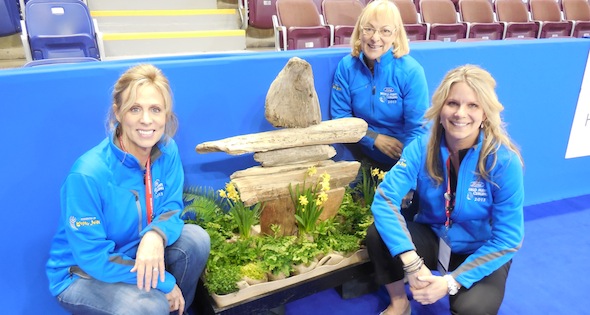 Volunteering has always been something that I was encouraged to do by my parents. They taught me that it was important to give back to your community and to share good fortune. As a result of a lifetime of being involved, the rewards have been immense. I have a life full of friends all over the community, the country and around the world. Being involved has been a life-enhancing experience. So when the Ford World Curling Championship, presented by Booster Juice, was awarded to Victoria, we decided to make it a family affair. The result was the Dagg-Jackson family taking on the leadership of the Decorations and Information Booths Committee, which has kept us busy, entertained and involved for months! When we chose our theme for this championship, it was with the hope that we could provide visitors and viewers alike a glimpse of our island paradise here on Vancouver Island. So we chose the iconic inuksuk, made famous during Vancouver 2010, and gave it a Vancouver Island twist with driftwood similar to that found on local beaches. The result is, with some close friends, and some new friends and my family, we have displayed 45 stone inuksuit, 300 west coast ferns, 3,000 daffodils, 25 potted spring bulbs and 10 huge driftwood inuksuit. The feedback has been wonderful, with the comments from folks being just what we hoped – they tell a story about life here on Vancouver Island. I have reconnected and visited with so many friends here at this championship. Much of the fun is not knowing who you will run into next, or even better, the next new friend you will meet. That’s the reason why there is nothing to compare to being at a Season of Champions curling event in person. More than 500 volunteers have worked on this event in similar ways to those on my committee, giving their time, energy and friendly guidance to make this event special for all. The blue jackets have been a constant friendly image everywhere you look, and their contribution will contribute to the memories the visitors will take away from this event. My career as women’s National Coach and Program Manager takes me across the country and around the world, so spending this week at the Ford Worlds right here at home in Victoria has been a treat. Sharing our beautiful Save-On-Foods Memorial Centre, the Original 16 Patch and our amazing city with friends and family makes it even more amazing.  We are having the time of our lives! (Canadian Curling Association national women’s team coach and longtime Victoria resident Elaine Dagg-Jackson is writing blogs from the 2013 Ford World Men’s Curling Championship, presented by Booster Juice)