Sweden to play for gold at Ford Worlds 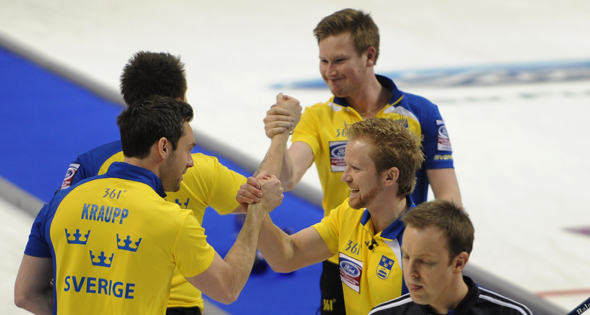 It was handshakes all around for Team Sweden after their Page playoff 1-2 victory over Scotland on Friday. (Photo, CCA/Michael Burns)

Edin made a cold draw to the four-foot to finish off the victory at the Save-On-Foods Memorial Centre in Victoria, B.C. The win lands the Swedes in Sunday’s 4 p.m. (all times Pacific) gold-medal game, where Edin and his teammates will try to finish off a splendid season that saw them also win the European championship on their home ice in Karlstad in December. No team has ever swept the European and world men’s titles in the same season. “It feels amazing,” said Edin, who has bounced back strongly since undergoing back surgery at last year’s world men’s championship in Basel, Switzerland. “We were feeling really good before the Worlds last year; then I got injured and we felt we didn’t really get to perform as well as we have been for the last couple of years. So this year, going in, we put a lot of pressure on ourselves, started the week pretty badly and the last couple of games we played fantastic and they made my job really easy.” The Swedes will play the winner of Saturday’s 4 p.m. semifinal between Scotland and the winner of Saturday’s 11 a.m. Page three-four game between Canada’s Brad Jacobs and Denmark’s Rasmus Stjerne. It was a tight game for the first five ends, but Sweden, which has collected bronze medals at the past two world men’s championships, took the early momentum when Edin made an open hit for two in the second end. Sweden ramped up the pressure in the latter five ends, forcing Murdoch to draw for a single while looking at three in the sixth, and then scored another deuce in the seventh on an Edin draw after Murdoch barely missed on a runback double takeout. Scotland was forced to one in the eighth, then stole one in the ninth when Edin rolled out on an open hit. But in the 10th, Edin coolly drew to the four-foot for the victory. “We pretty much controlled this game,” said Edin, who’s hoping to win Sweden’s first world men’s title since national coach Peja Lindholm, who’s here with the team this week, won in 2004 at Gävle, Sweden. “It was close on the scoreboard, but we really felt that we controlled this game. It feels amazing and to go straight to the final having secured a medal already, that’s just great. Scotland, which finished first in the round-robin standings with an 8-3 record, now needs to bounce back against the Canada-Denmark winner in hopes of reaching the final, where Murdoch would have a crack at winning a third world title. Teammates Tom Brewster, Michael Goodfellow, Greg Drummond and Scott Andrews, meanwhile, would be trying to win their first gold medal after losing the past two finals to Canada (Jeff Stoughton in 2011, Glenn Howard in 2012). “We’re just going to have to bin that and come out tomorrow and bring our ‘A’ game,” said Murdoch. “That wasn’t quite our ‘A’ game tonight and if you don’t do that, you’re not going to beat the top teams that are left here. We’ve got lots to play for, it’s all or nothing now, so we’re just going to have to wait to see who we’ll play tomorrow. To be honest, I can’t wait to get another game, because this team fights. We’ve done that before, we’ve done that in the past, and we’ll do it again.” The Page three-four loser and semifinal loser will play for the bronze medal on Sunday at 11 a.m. For more event information, including rosters and the official draw, and to purchase tickets, go to: www.curling.ca/championships/worlds/. Live scoring and standings are available at: www.curling.ca/scoreboard/?e=12. TSN/RDS, the official broadcast partner of the Canadian Curling Association, will provide live coverage of Canada’s round-robin games, in addition to all playoff games. In French, all of the games will be shown live on RDS2.