Team Canada a win away from gold at Ford Worlds

Team Canada is a victory away from collecting a fourth straight gold medal at the Ford World Men’s Curling Championship, presented by Booster Juice. 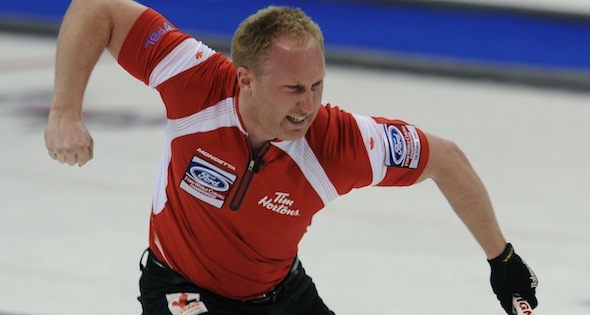 Brad Jacobs’ Sault Ste. Marie, Ont., team — third Ryan Fry, second E.J. Harnden, lead Ryan Harnden, alternate Matt Dumontelle and coach Tom Coulterman — capped a wonderful Saturday at the Save-On-Foods Memorial Centre in Victoria, B.C., with a 6-3 win over Scotland’s David Murdoch in the semifinal of the 2013 Ford Worlds. With the victory, Canada advances to Sunday’s 4 p.m. (all times Pacific) gold-medal game against Sweden’s Niklas Edin. Jacobs is hoping to follow in the footsteps of recent Canadian gold-medallists Kevin Koe in 2010 at Cortina d’Ampezzo, Italy; Jeff Stoughton in 2011 at Regina; and Glenn Howard last year in Basel, Switzerland. “We’re in the world final,” marvelled Jacobs, whose team was 7-4 to finish fourth in the round robin and then defeated Denmark’s Rasmus Stjerne 8-6 in the Page playoff three-four game earlier on Saturday. “I think we lost four of our last six games in the round robin, but we’ve managed to scrape our way into the final and I think it says a lot about our character, the way that this team has been able to park those losses and come out knowing what we’re capable of doing, and then going out and doing it. It’s just phenomenal.” The Canadians did their damage in the middle ends. After forcing the Scots to a single in the first end, Canada blanked the following two ends before taking the lead with a deuce in the fourth end thanks to a precision come-around draw by Fry that led to Jacobs’ open hit for the deuce. The Scots were again forced to take one in the fifth, and in the sixth, a clutch double-takeout and roll behind a corner guard by E.J. Harnden set the table for Jacobs to make a delicate wide inturn takeout — swept brilliantly by the Harnden brothers — to score a game-changing three. Canada gained some insurance in the eighth (the Scots had blanked the seventh) when Murdoch was narrow on his last-rock triple-takeout attempt to score a possible three. Instead, the Canadians stole one, and the margin proved too much for Scotland. “That was gut-wrenching,” said Murdoch, who fell short in his bid for a third world championship. “I firmly believed this team would win this week. We had a few chances and those guys played extremely well, I have to say. They had a great game. They’ve got a bit of momentum and they’ve got the crowd behind them — they put on a good show.” Fry, who made a huge runback triple-takeout in the 10th end of the win over Denmark, and continued that dazzling shotmaking in the semifinal against Scotland, had a wonderful day. He was hardly alone though; Canada was scored at 92 per cent in the semi compared to 85 for Scotland. “I’m just happy that we got back to playing well,” said Fry. “I’ll worry about what comes with winning (the world title) tomorrow. I just wanted to do all the right things today and I know the guys all feel the same way.” Jacobs and Co. will attempt on Sunday to become the first Northern Ontario team to win the world championship since 1985 when Al Hackner did it. Hackner is in Victoria as a national coach for the USA Curling, while Hackner’s third on that 1985 team was Rick Lang, who’s in Victoria as Canada’s national men’s coach. Hackner’s opponent in that 1985 final in Glasgow, Scotland: Sweden, skipped by Stefan Hasselborg. It will be the seventh time Canada has played Sweden in the men’s world championship final, with Canada holding a 4-2 advantage. The most recent Canada-Sweden showdown was in 2000 at Glasgow when Greg McAulay defeated Peja Lindholm — now Sweden’s national coach — for the gold medal. “I’m really looking forward to playing Sweden in the final,” said Jacobs. “They’re friends of ours off the ice and rivals on the ice. Hopefully it will be everything that everyone expects, a back-and-forth battle and a shootout. Hopefully both teams can provide that tomorrow.” For more event information, including rosters and the official draw, and to purchase tickets, go to: www.curling.ca/championships/worlds/. Live scoring and standings are available at: www.curling.ca/scoreboard/?e=12. TSN/RDS, the official broadcast partner of the Canadian Curling Association, will provide live coverage of Canada’s round-robin games, in addition to all playoff games. In French, all of the games will be shown live on RDS2.